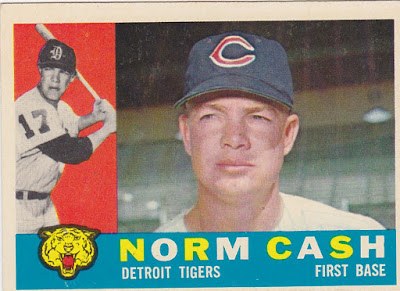 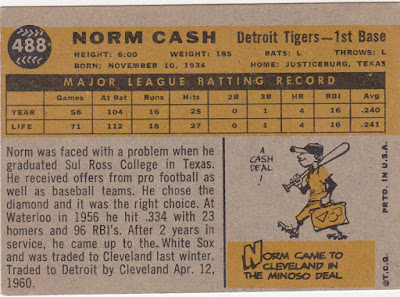 
"Although Cash wore a Cleveland cap on his 1960 Topps baseball card, he never played an inning for the Indians. On April 12, as the Tribe headed north from Tucson at the conclusion of spring training, Cash found himself traded yet again. This time, he was dispatched to Detroit in exchange for third baseman Steve Demeter. Detroit General Manager Rick Ferrell was dumbfounded when Frank Lane, his Cleveland counterpart, offered Cash for Demeter, unsure if he meant “cold cash or Norm Cash.” While Demeter’s career with the Indians consisted of merely four games, Cash became a fixture at first base in Detroit for 15 years. Lane was not through making controversial trades with the Tigers. Five days later, he sent Rocky Colavito to Detroit for Harvey Kuenn, and later in 1960, the two clubs swapped managers, Joe Gordon going to Detroit for Jimmie Dykes."


The Card: Cash had been traded twice since the end of the 1959 season, first from the White Sox to the Indians in December and then to the Tigers in April. Topps stuck an Indians' logo on his cap for his card but didn't re-do it after his trade to Detroit. But this 6th Series card was created late enough to correctly list him as a Tiger and his 'action b&w shot on the left had a Tigers logo added to his cap.

The cartoon notes that he 'came to Cleveland...' which reads like it was drawn prior to his trade to Detroit. That deal is mentioned at the end of his write up and that reads like a late addition to the card.

Posted by Commishbob at 7:07 PM