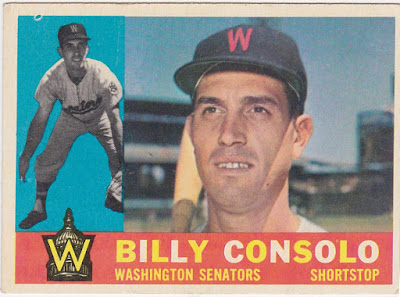 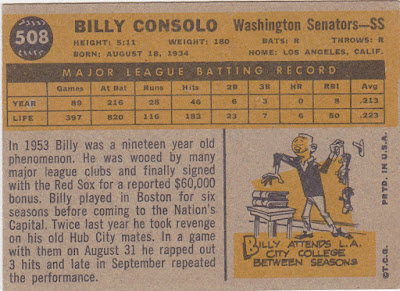 Career: Consolo was a 'Bonus Baby' signee of the Red Sox in 1953 and played in Boston through June of 1959 when he was traded to the Senators. With the BoSox he never could claim a full time spot and had over 200 plate appearances only twice. He spent nearly three seasons with the Senators/Twins and then moved around to the Braves (minor league affiliate), Phils, A's and Angels, always as a spare part. He was a good fielder capable of playing almost anywhere in the infield but only hit .211 for his career.

He was a longtime Tigers coach later in life after a stint as a barber in LA, just as his father had been.

In 1960: He played in 100 games which was a career high but his batting stats were pretty abysmal.

WikiFacts: Consolo grew up in Los Angeles and was a lifelong friend of Sparky Anderson. From his SABR bio:


While on the local playgrounds he met George Anderson -- later known as Sparky. They signed up at the local park, where it cost 50 cents to play baseball, and a lifelong friendship began. The Twentieth Century movie studio was just around the corner and some of the games they played were against the Our Gang actors and other child stars. Billy began to attract attention from some West Coast scouts while playing on the sandlots. He first attracted notice at the Rancho Cienega Playground; his slingshot arm, base-running speed, and hitting power for a kid his age were bound to generate talk among the scouts spying the amateur ballfields around Los Angeles.


The Card: Blue/red/yellow/white makes a nice combo on this otherwise routine card. Apparently Consolo didn't have enough memorable moments in 1959 to warrant a Season's Highlights back. He got a 'blurb' instead.

This appears to me to be a rare Griffith Stadium locale card. I wouldn't swear to it though. It's a high number and one of a pretty nice group of high and semi-high numbers I picked up recently. They were in really nice shape overall and priced as if they were early series cards. I suspect the seller goofed on these.
Posted by Commishbob at 12:50 PM