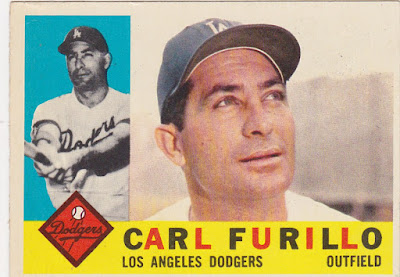 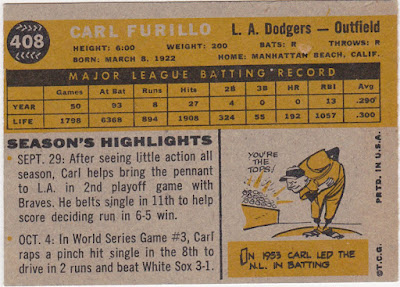 Career: Known for a consistent, high average bat and strong throwing arm Carl Furillo enjoyed a 15 year career with the Dodgers in Brooklyn and L.A. He held down an outfield spot for 13 seasons as a starter and finished with a .299 career average and 192 homers. He was a two time All Star and won the NL batting crown in 1953. He led the NL outfields in assists twice.

In 1960: This was the end of the line for Furillo. He started a couple of games and pinch hit in a few more before suffering a torn muscle and being released by the Dodgers in May. Before the year was out he had sued the Dodgers on the grounds that he had been cut while he was injured and, oddly, was hired by them as a spring training instructor. His lawsuit was upheld and he was granted a slightly higher monthly pension. It was also reported that he was blackballed and for that reason he never was hired as a coach or scout.


His best season was in 1953 when he led the National League in batting with a .344 average. He won the title despite being sidelined with a broken finger incurred in a brawl. Furillo had been hit by a pitch from the New York Giants' Ruben Gomez, and then charged the Giant manager, Leo Durocher.
"We hated the Giants," he recalled years later. "We just hated the uniform."

The Card: If I didn't know any better I'd say that was my Uncle Joe pictured on that card. hard to say where this photo was taken. I could make a case for Wrigley (is that the scoreboard?), the Polo Grounds (are those the apartment buildings?) or the Coliseum in LA.

The back is unique in that it list just two Season's Highlights and those both recall postseason exploits for Furillo. I think that's pretty cool.

BTW...Furillo to me is a Brooklyn Dodger, not a Los Angeles Dodger. Seeing him in a cap with 'LA' on it is always odd.

Posted by Commishbob at 9:17 AM