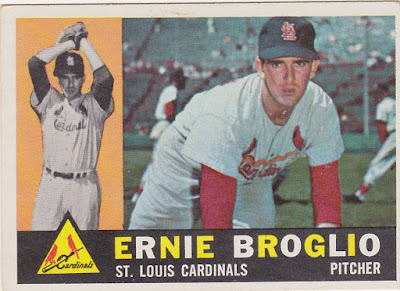 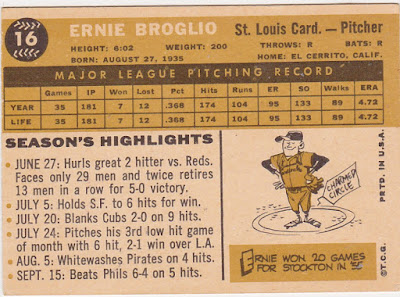 Career: Broglio is best remembered as the guy the Cardinals traded to the Cubs to get Lou Brock but he had a respectable career in his own right. He won 77 games with a decent set of numbers over eight seasons. Hi was originally signed by the Reds and passed thru the Giants chain but pitched only for the Cards and Cubs in the majors. His best year was certainly 1960.

In 1960: Started the season in the bullpen and was 2-1 as late as the end of May but he got a shot in the rotation and took advantage to the tune of a 21 win season. He led the league in wins, WAR by Pitchers, and Hits Per 9 Innings. He was second in ERA and finished third in Cy Young voting.

WikiFacts: Interestingly the general reaction to the now infamous Broglio-Brock deal was that the Cubs had gotten the best of it. Here is a bit of SABR's Broglio bio detailing the events surrounding the deal:

Broglio started on June 12 [1964] in Los Angeles, but Koufax blanked the Cardinals again. Broglio’s record was now 3-5. In 11 starts his strikeouts were noticeably down to three per game. On June 14, after the Dodgers swept the series, the Cardinals boarded their plane for Houston.
General manager Bing Devine had been busy on the phone right up to departure and later he sat by Keane during the flight. Devine said, “I can make the deal with Chicago.” Keane’s response was either “Make it!” or “What are we waiting for?” depending on what account the St. Louis fans read. As soon as they landed in Houston, Devine called Cubs general manager John Holland. Three other trades in the major leagues were announced on June 15, but none proved larger than the one between the Cardinals and the Cubs.
Broglio, pitcher Bobby Shantz, and outfielder Doug Clemens were sent to Chicago for outfielder Lou Brock, pitcher Jack Spring, and pitcher Paul Toth. Keane summoned Ernie to his hotel room to tell him about the trade, and Broglio was shocked. Several veteran Cardinals were very negative about the deal and declared that the Cubs got the better of the trade. Keane called a team meeting before their game to tell the players to cease their grumbling. Meanwhile, Chicago Daily News columnist Bob Smith was jubilant as he wrote about acquiring Ernie, “Thank you, thank you, oh, you lovely St. Louis Cardinals. Nice doing business with you. Please call again anytime.”


The Card: Action, even of the staged variety, is welcome in the 1960 set, Broglio poses here in Seals Stadium in San Francisco. The back is pretty standard but cream cardboard wins points with me. Off-centeredness hardly registers with me anymore in this set.