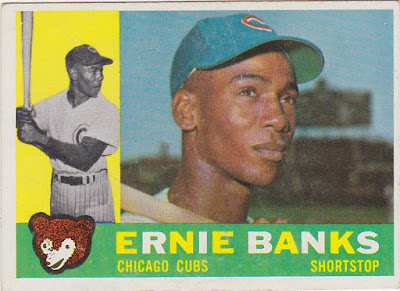 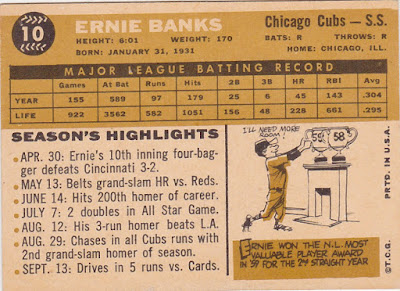 In 1960: He was coming off back-to-back MVP Awards and he led the league with 41 homers, was first in extra base hits, third in WAR, third in RBI and won his only Gold Glove. He also played in more games than any other NLer, for the sixth time in seven years. This was his last year to play shortstop exclusively. In 1961 he began transitioning to first base (with a brief  fling in left field).


A four-sport standout in high school, Banks was scouted and signed at 17 by the Negro League's Kansas City Monarchs' traveling team's manager, legendary Cool Papa Bell. He made his semi-pro debut on June 4, 1950, and played the remainder of the season before being drafted into the Army in 1951. Stationed in Europe, he played shortstop for the 242nd Group Barons, part of a baseball conference run for American servicemen there.
While abroad he was informally scouted by a player in the Cleveland Indians minor league system. According to a story told by a former comrade, Banks then received a letter from Cleveland GM Hall of Famer Hank Greenberg inviting him to try out with the Indians when his hitch was up.[1] However, upon his discharge Banks returned to the Monarchs for the 1953 season. Actively scouted during it by the Cubs, he signed a big league contract with them on September 8, 1953. Banks played his last game for the Monarchs on September 13th and joined the Cubs four days later, never having played a single game in the minor leagues.
On August 8, 2013, he was named a recipient of the Presidential Medal of Freedom, the nation's highest civilian honor, by President Barack Obama; the medal was given to him at the White House on November 20th that year. Former President Bill Clinton was among those who received the medal from the president that day.
He became the first Cubs player to have his uniform number retired by the team when his number 14 was set aside in 1982.


The Card: This is the second consecutive card of an 'Ernie' who is associated with the Cubs. Happened quite accidentally. Using a photo of Ernie Banks in any other stadium than Wrigley would be a sin. Here he looks pensive with that unmistakable Wrigley scoreboard looming in the background. Green/yellow/white motif is nice on this one. Have I mentioned how much I like the Season's Highlights. I especially like when a milestone is mentioned.
Posted by Commishbob at 9:06 AM