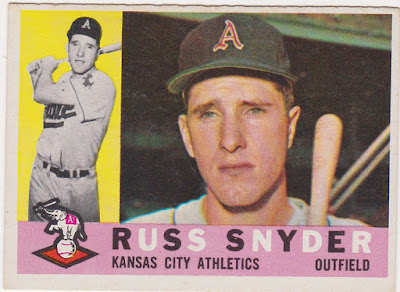 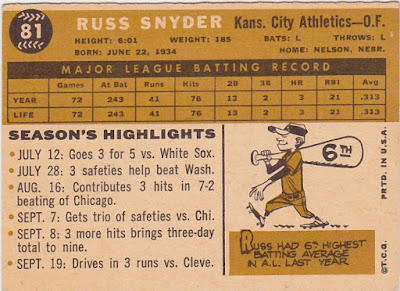 Career: Snyder was an outfielder in the Yankees' chain for six seasons during the Fifties. He hit in the .280s for the most part which wasn't going to be good enough to squeeze himself onto the loaded Yanks' roster. He was dealt to Kansas City in 1958 and a year later debuted with the A's. He finished third in the '59 Rookie of the Year balloting before slumping in 1960 and being shipped to Baltimore. He spent seven years with the Orioles (the bulk of his career) and was a valuable starter and fourth outfielder for most of that time. He hit .306, contributed with his glove and won a ring with the O's in 1966.
He finished his career in 1970 after stops with the White Sox, Indians and Brewers. He retired to his native Nebraska and still lives there.

In 1960: He suffered from the dreaded 'sophomore jinx' and saw his average fall fifty points from his .313 mark as a rookie. With sixty more at bats he couldn't push the needle much higher (one more homer, five more RBI) and he was off to the Orioles after the season.

WikiFacts: Baltimore Sun interview in 2013: A slap-hitting, sharp-fielding outfielder, Snyder batted .306 for the World Series champion Orioles that year. He led the American League in hitting (.347) at the All-Star break.

His glove served the team down the stretch. On Sept. 22, in a victory over Kansas City, Snyder's diving catch of a line drive finished off the Athletics and clinched the Orioles' first pennant. And in the World Series opener in Los Angeles — a 5-2 victory — he scored the game's first run, singled in another and saved two Dodgers' runs in the second inning with a dramatic lunging catch of John Roseboro's sinking liner.

Forty-seven years later, Snyder recalled his desperation in running down that shot in center field.

"When the ball was hit, I just took off," he said from his home in Nelson, Neb. "The closer I got, the more I thought I could catch it. I dove and … well, that really was one of the turning points of the Series."

Tony L. recently profiled Snyder over on his 'Off Hiatus Baseball Cards' blog. Check it out.

The Card: There are more than a few cards with pink elements scattered through the 1960 set. And they are among my favorites. Add in the cream cardboard and highlights back and it's a 'keeper'. That appears to be Yankee Stadium for those keeping score

Posted by Commishbob at 5:05 PM