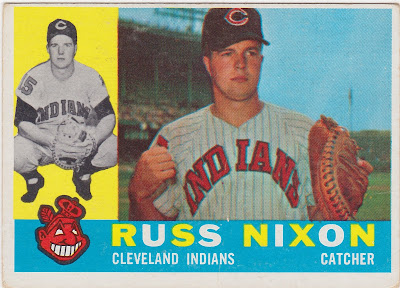 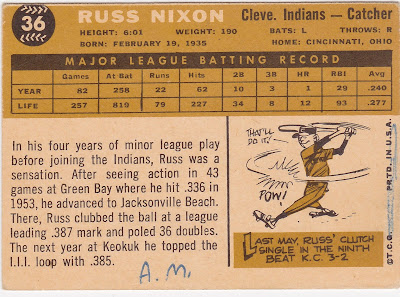 Career: Russ Nixon spent 12 seasons as a big league catcher for the Indians, Red Sox and Twins. He was never an All-Star or hit for much power but he had a respectable career .268 average. He also managed the Reds and Braves and served as a coach, instructor, and  minor league manager well into his 70s.

In 1960: He split the year between the Indians and Red Sox due to a trade in June. The deal revived his bat and he hit .295 after arriving in Fenway. Here's a fun fact from Wikipedia on his 1960 season: "Nixon was actually traded twice to the Red Sox in 1960. Cleveland initially dealt him to Boston on March 16 for catcher Sammy White and first baseman Jim Marshall. White chose to retire and the trade was canceled but not before Nixon played five exhibition games for the Red Sox. Nixon returned to the Indians and started the regular season with them, appearing in 25 games, 21 as the starting catcher; then, almost three months after the original swap, on June 13, he was traded to the Red Sox a second time, with outfielder Carroll Hardy for Canadian-born pitcher Ted Bowsfield and outfielder Marty Keough."

Off The Charts: His twin brother, Roy Nixon, never reached the majors. They were both signed on the same day by the Cleveland Indians and were teammates on the 1953 Green Bay Bluejays and both had 46 hits - but Russ did it in 137 AB while it took Roy 182 at-bats to reach that figure.

The Card: Someone, likely a kid, wrote his initials on the back of this card. Writing on the front of a card is an issue for me. On the back? It's not a big deal. This photo was taken at Municipal Stadium. Nice for a change of pace.
Posted by Commishbob at 12:15 AM