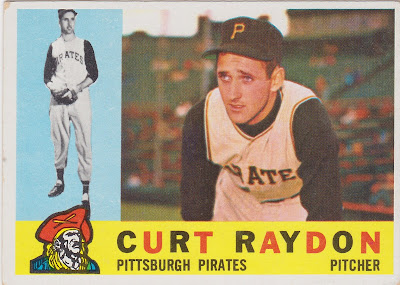 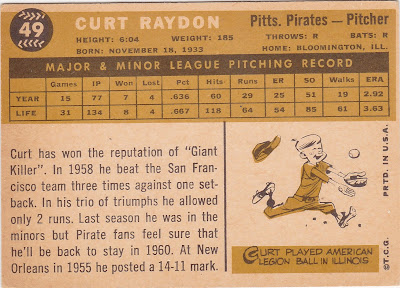 Career: Raydon was signed by the Braves in 1953 but a year later was dealt to the Pirates. He pitched his way to the big club over four seasons and had a fine rookie year in 1958. That season he made 20 starts for the Pirates, with 31 appearances in total. He went 8-4 with an ERA of 3.62 and an outstanding hits per IP ratio. He developed both a cyst in his pitching hand and a sore arm and never returned to the majors. He retired after the 1961 season.

In 1960: He had a second consecutive fine season in the Pirates chain. It's a bit surprising he never returned to the bigs after his 1858 rookie year.

Off the Charts: Here is an interesting (and damning) look at how players like Raydon were treated in regards to a baseball pension.

The Card: Great color combo and a shot of Raydon in Seals Stadium, no doubt taken in 1958. As for Raydon...I'd be smiling if I had a baseball card with a Jack Davis cartoon. Just sayin'.
Posted by Commishbob at 2:02 PM