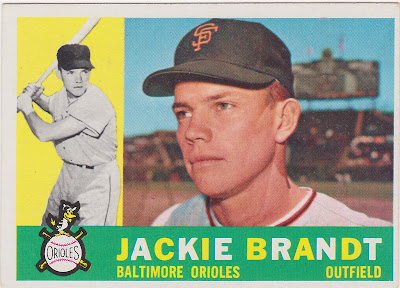 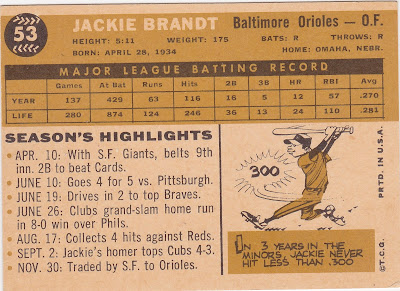 Career: Brandt was an outfielder for 11 seasons for five different clubs, most notably for the Orioles from 1960 through 1965. He was nicknamed 'Flakey' for his quirky personality. He was a great fielder with a lot of speed and he had a touch of power at the plate. His best season was 1961 when he hit a career-high .297 and made the AL All-Star squad.

In 1960: He came to the Orioles off his 1959 Gold Glove-winning season with the Giants. He was the Orioles' regular centerfielder but also appeared in left, right, at first and at third. His average fell off to the .250s but he was about to bounce back in '61.

Off The Charts: In interviews, Brandt jokingly takes credit for the Orioles 1966 title. He cites the fact that he was traded to the Phillies in December of 1965 for Jack Baldschum, who was then dealt to the Reds as part of the Frank Robinson trade. On a personal note..Brandt was in the lineup for my first game in two stadiums, Memorial in 1962 (he homered!) and the Astrodome in 1967.


The Card: He had been traded to the Orioles at the end of November of 1959. Time enough for Topps to change the team on the card but not enough for an Orioles photo. They were able to airbrush the uni in the 'action pose' photo though. Wrigley Field provided the backdrop. This isn't my favorite Brandt card but any O's card is a good O's card. If I had Photoshop skills I'd come up with an updated version.
Posted by Commishbob at 11:05 AM