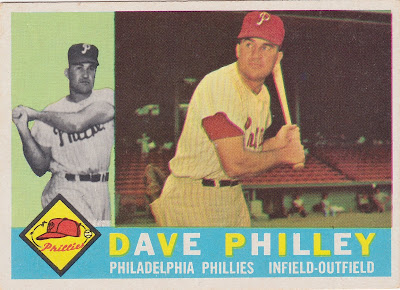 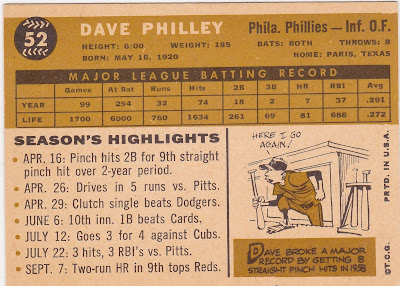 Career: Eight teams, 18 seasons over the course of 21 years, a three year WWII military stint. Dave Philley had a lot of stories to tell at Old Timers games I'd bet. He began in 1941 with the White Sox, took some time for serving his country and then played almost 1900 more games before he retired in 1963 at the age of 43. That year, after a long big league career, he got in a few swings with the Colt 45s' minor league team in Modesto while serving primarily as a coach/instructor.

His SABR bio is good reading.

In 1960: He was dealt twice during the season, first from the Phils to the Giants, then from the Giants to the Orioles. He had a career-low .218 average as he neared the end of the playing trail.

Off The Charts: He earned Orioles' MVP honors in 1955 by hitting .299 in a role as a platoon outfielder and primary pinch hitter.

The Card: Connie Mack Stadium photo cards are easy to spot with those red seats. Of course, the Phils' red pinstripes is a giveaway as well. The first bullet highlight relates to the cartoon as Philley had a nice string of pinch-hit appearances dating back to the 1958 season.
Posted by Commishbob at 12:11 PM