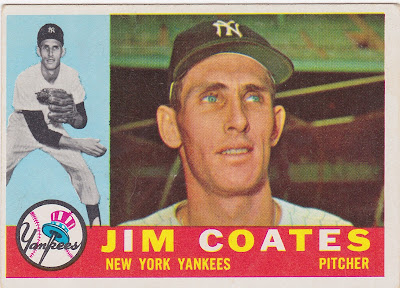 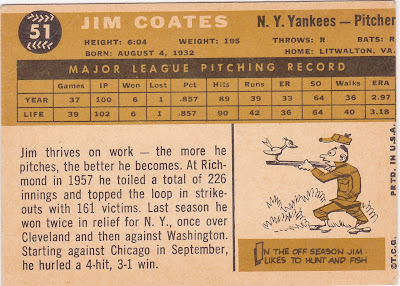 Career: It took Jim Coates more than six years to reach the majors for good after signing with the Yanks in 1952. He settled in as a spot starter/long reliever in '59 and had a 6-1 season and sub 3 ERA. He went on to pitch five years for the Yanks and another four with the Senators, Reds, and Angels. He hung on in the minors until 1970. He pitched in three World Series for NY and won a pair of rings.

In 1960: This was his best season in the majors. He won 13 games and led the AL in winning percentage. He made his only All-Star team and pitched two innings in the first of the two played that year. In Game 7 of the Series that year he relieved Bobby Shantz in the bottom of the eighth and nearly put out the fire by getting a couple of outs before he gave up a single to Roberto Clemente and a homer to Hal Smith (a couple of cards down the screen) which gave the Pirates a lead they'd blow and then regain in dramatic fashion.

Off The Charts: From Wikipedia...[Coates'] nickname, "The Mummy," came from his funereal visage on the mound ..... He was also well known for throwing at opposing batters. Jim Bouton, in his book, Ball Four, said Coates, after throwing at the opposing hitters, "would not get into the fights that followed." Coates now has a book entitled "Always a Yankee."

The Card: I wonder if they airbrushed his eyes or were they really that bright shade of blue?