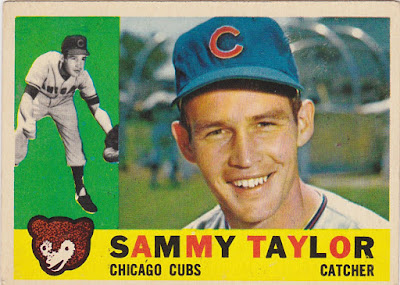 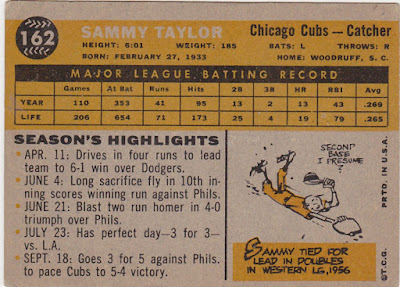 Career: Taylor played in 473 games over six years in the majors, all but four of them in the NL, primarily with the Cubs. He was the primary backstop in Chicago in his first two seasons 1958 & '59. He had some pop as his 13 homers in '59 will attest. But he had some defensive shortcomings, too. That same season he led the NL catchers in errors and stolen bases allowed and he was second in passed balls.

He had a military stint of five years after first turning pro in 1950. After his tenure with the Cubs he joined the '62 Mets late in April of that inaugural season after a trade. His final year in the bigs was 1963 and he was traded twice, from the Mets to the Reds and then on to the Indians.

In 1960: Coming off his two seasons as the Cubs' semi regular catcher Taylor was one of a committee of four catchers that shared the job in 1960. His hitting fell off to .207  from the previous season's .269 career best.

WikiFacts:  On June 30, 1959, Taylor was involved in one of baseball's stranger plays.  Stan Musial of the Cardinals drew a walk on a wild pitch from the Cubs' Bob Anderson. As the pitch got by Taylor, Musial tried for second.

Cubs' third baseman Alvin Dark ran to retrieve the ball which had been tossed by a bat boy to the field announcer Pat Peiper. Peiper let it drop so that Dark could field it. While this was going on, umpire Vic Delmore routinely tossed a new ball to Taylor.

Taylor threw the ball to Anderson and Anderson threw it to second at the same time Dark was throwing the "real" ball to shortstop Ernie Banks. Anderson's throw was high and the ball rolled into the outfield.

Musial thought it was safe to continue to third and was tagged out by Banks. Musial is ruled out by the umpires even though the bat boy touched the ball. -Numerous sources

The Card: Assuming the picture was taken the previous season Taylor is about 26 years old in the photo used on his card but he looks to be about 18. And knowing Topps that is probably a shaky assumption.
Posted by Commishbob at 2:17 AM