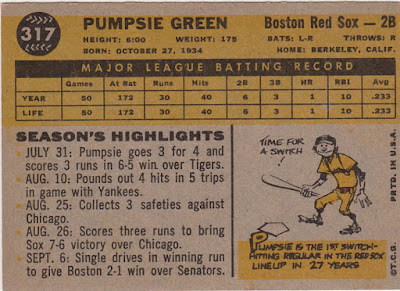 Career: The Red Sox were the last team to integrate and Pumpsie Green was the one to do it. He debuted in late July of 1959. Pitcher Earl Wilson followed about a week later. Green and Wilson became the first African-Amercans to take the field in Red Sox uniforms at Fenway on August 4th (Green) and 5th (Wilson).

Green played for Boston through the 1962 season as a utility infielder. He finished his major league career with a '63 stint as a New York Met. Bracketing his big league days were many years in the minors. He hit .246 for his career with 13 homers.

WikiFacts: Green's SABR bio is well worth the read. It's an interesting look at a guy who wasn't trying to be a pioneer, just a ballplayer. And as a sidelight there is this strange story:


The biggest headlines Green earned in 1962 were when he and Gene Conley went AWOL, walking off the team bus as it was stuck in heavy New York traffic. It was July 26, and the team had just lost to the Yankees, 13-3, and the players were hot. They thought they might get a drink, and seem to have “done the town in style.” Conley apparently also tried to talk Pumpsie into going to Bethlehem with him “to be nearer to God.” Pumpsie preferred rejoining the team in Washington and turned up a little more than 24 hours later. Conley returned on the 29th. Pumpsie appeared in 56 games (fielding in only 23 of them), hitting .231 in 91 at-bats. He drove in 11 runs.

The Card: The subsets in the 1960 Topps set are all pretty sharp. That's Yankee Stadium behind Pumpsie. But it's the right field line which doesn't get the exposure that the left field side does in Topps cards. He doesn't look happy but any card with the Rookie Trophy automatically gets bonus points.