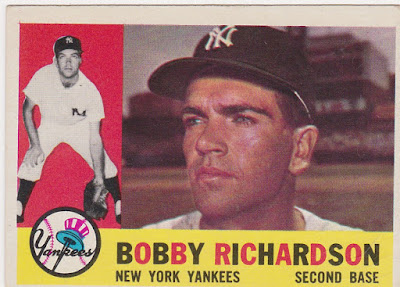 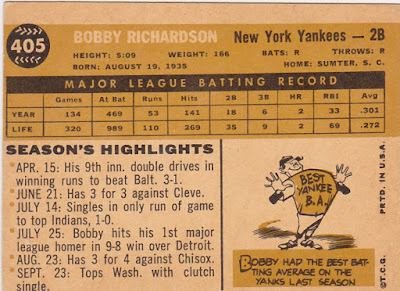 Career: Richardson played his entire career with the Yankees. He broke in with brief stints in 1955 and 1956 before establishing himself as a starter (and All Star) in '57. He twice hit over .300 and is one of only four players to have 11 or more hits in two different World Series. He appeared in seven World Series with the Yanks, winning three. He was a seven time AL All Star, won five Gold Gloves and was second in the 1962 MVP voting.

In 1960:  Richardson had one of his worst years at the plate during the regular season but his .367 average and 12 RBI in the Yanks title win over the Giants earned him the Series MVP.

WikiFacts: "In his playing career and his life, Bobby Richardson cast a longer shadow than his 5'9" frame might suggest. He was a good hitter and a marvelous set-up man for one of the most famous slugging duos in baseball history. He was an excellent fielder for a team loaded with groundball-inducing pitchers. Above all, he was a member of the New York Yankee family during one of their most golden eras, and he was proud of it. Famously, Mickey Mantle's widow, Merlyn, asked "the Preacher" to deliver the eulogy at Mickey's funeral service in 1995. The Mantles were at Roger Maris' funeral ten years earlier when Bobby recited a poem that a fan sent him, and Mickey made Richardson promise that he would read it at Mickey's funeral, too." -Richardson's SABR bio

The Card: It's very much miscut...I picked it up in that condition to counteract the "Yankee Tax" you pay for cards of the Bombers from this era. I like it a lot though, as I do any card with the Yankee Stadium scoreboard in the background.