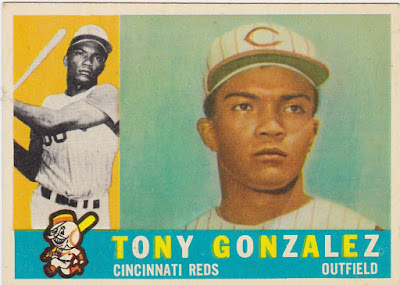 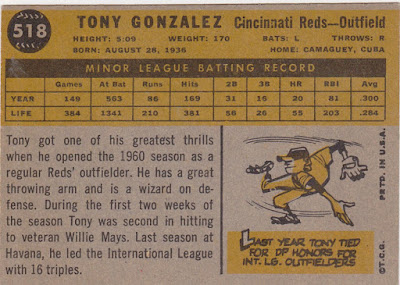 Career: The bulk of Gonzalez' 12 year career came with the Phillies. He quietly amassed some very solid numbers hitting over .300 three times and finishing second to Roberto Clemente in the NL with a .339 average in 1967.

He had an outstanding arm was also was an excellent glove in center as he led the league in fielding at that spot three times. He did well in his only post-season experience when with the '69 Braves he homered and went 5 for 14 in the NLCS. After finishing his major league career with the Angels he played a season in Japan and another year in the minors, serving as a player-coach.

In 1960: This was his rookie season and he got off to a slow start with the Reds before he was traded with Lee Walls to the Philadelphia Phillies for Frederick Hopke, Harry Anderson and Wally Post in mid-June. In Philly he made a huge turnaround and hit .299 as a near regular in the outfield.

WikiFacts: "The 5-foot-9, 170-pound Cuban remembered being called “Little Dynamite” because when he hit the ball, it was said to explode off his bat." -SABR bio

The Card: This is a high number series card and the write-up reflects that with references to the opening of the current season. You don't see that these days.
Posted by Commishbob at 3:00 PM