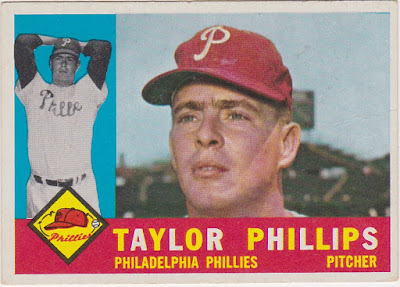 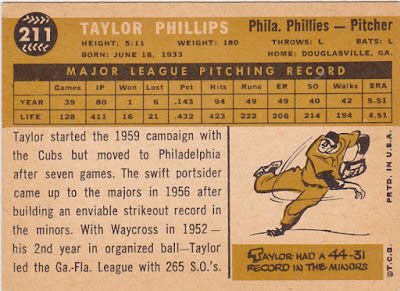 Career: Phillips is one of 178 players who have appeared for both Chicago franchises (89 of those pitched for both). He was 16-22 with the Braves, Cubs and Phillies from 1956 through 1960. He made 138 appearances, about a third of them as a starter. Then after three seasons in the minors he returned to the bigs in 1963 making a handful of rather ineffective appearances with the White Sox. One more year of minor league ball and then Phillips retired.

In 1960: He was with the Phils for about a month or so in 1960. After a loss in his first game, a June 2 start in which he lasted two innings, he was sent to the bullpen when he ran hot and cold before being shipped back to the minors.

WikiFacts: As a rookie for the first place Braves in 1956 Phillips made his first career start on August 9 in the first game of a doubleheader against the Cardinals. He pitched a three hitter for a 4-1 win. He gave up only singles, to Don Blasingame, Wally Moon and Stan Musial.

The Card: Pretty standard stuff. That's Wrigley Field I believe. Phillips didn't have enough '59 highlights for the bullet-ed list so he gets a paragraph. The cartoon is pretty generic but I like it.