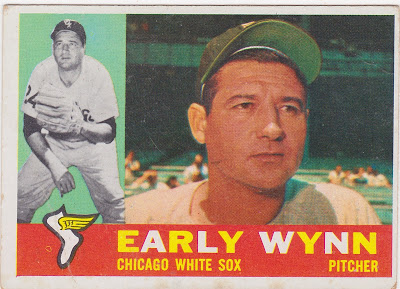 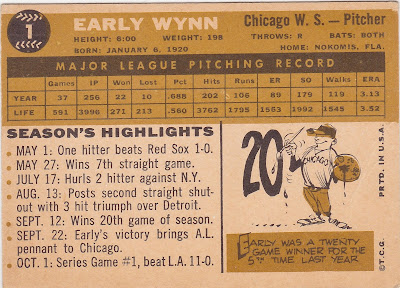 Career: A Hall of Famer, Early Wynn won exactly 300 games over the course of 23 seasons. He pitched his entire career in the AL, hurling for the Nats, Indians and White Sox. He made a return engagement with Cleveland in 1963 and won that elusive #300 in Kansas City in June in a game in which he struggled to make five innings. That was the next-to-last start of his career.

In 1960: He was coming off his 22 win, Cy Young Award season. He went 13-12 with numbers that indicated his time as an ace was coming to a close. He was an All-Star for the seventh (and final) time and pitched two hitless innings in the second of two ASGs played that year.

WikiFact: He earned that '59 Cy Young at the age of 39 which is not the record for the oldest winner. Gaylord Perry (age 40) and Roger Clemens (age 42) were both older when they won. Wynn's award came during the time when one Cy Young was given out instead of one in each league.

The Card: Sometimes I'll have a comment on the card, sometimes I may post a card of the player that I have in my collection that I really like. For example, this beauty from the '53 Bowman Color set. Great card from a terrific set. 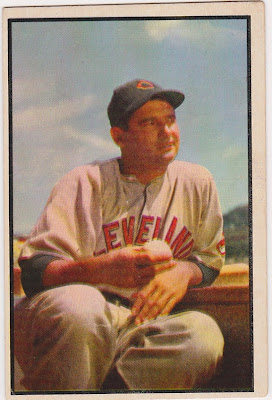 But I also should mention that I enjoy the fact that Wynn's Game One shutout of the Dodgers in the 1959 World Series is included in the Season's Highlights block.
Posted by Commishbob at 2:07 PM