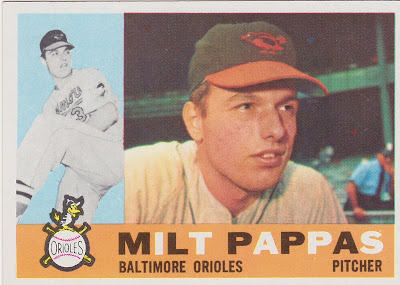 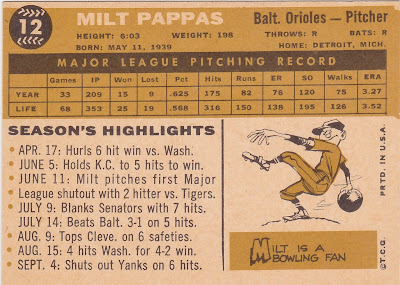 Career: Milt Pappas pitched very well for a very long time, first for the Orioles and then, after the trade he is most remembered for, the Reds, Cubs, and Braves. He won 209 games, pitched a no-hitter  (coming within an out of a perfect game), started the 1965 All-Star Game, saved one of the '62 ASGs, and admitted to grooving one that Roger Maris popped for his 59th in 1961.

The trade mentioned, of course, is the one that brought Frank Robinson to Baltimore in December of 1965. "Most lopsided trade of all time" is always tagged on to any mention of that deal and that always bothered Pappas. But he always felt a kinship to Charm City and was a special guest at a 2014 Old Timers reunion held by the Orioles.

WikiFacts: From his Wikipedia page:


During his career, Pappas was in the top 10 in ERA eight seasons, in wins six seasons, fewest walks per nine innings nine seasons, complete games seven seasons, shutouts eight seasons, and he was tied for the league lead with a perfect fielding percentage (1.000) in four seasons. Pappas also hit 20 home runs as a pitcher; as of 2014, he is one of 13 pitchers to hit at least 20 home runs.


The Card: One of my favorite color combos and a cool Jack Davis cartoon. This is a card I specifically remember from when it was new. I likely pulled it from a cello pack my folks bought me at EJ Korvettes.
Posted by Commishbob at 7:30 AM