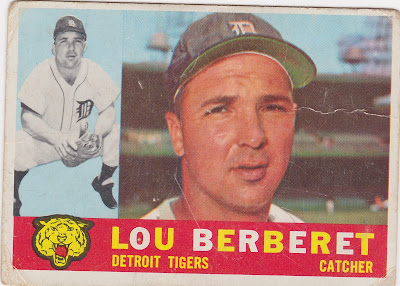 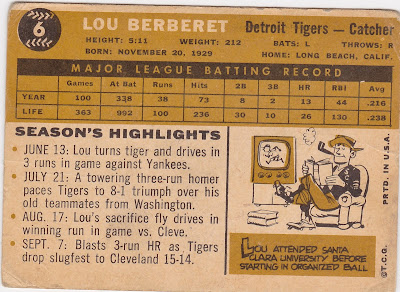 Career: Berberet was originally the property of the Yankees beginning in 1950. He spent some time in the military and then continued to put up pretty solid numbers at the plate in the minors. But as a catcher he had a roadblock named Yogi Berra in his way to say nothing of Johnny Blanchard, Elston Howard, Gus Triandos and longtime sub Charlie Silvera. It must have been like being the fifth son of the King...you know you'll never sniff the throne.

The Yanks dealt Berberet to the Senators before the 1956 season and he spent two years there sharing the catching job with Clint Courtney and Ed Fitz Gerald. Washington sent him on to the Red Sox early in the '58 season and then it was on to Detroit where he wrapped up his career in a platoon with Red Wilson.

In 1960: This was the final season in baseball for Berberet. He got nearly 300 plate appearances playing in half the games for the Tigers but hit just .194, his lowest full-season average. He then headed west to work in California as a sales manager in the liquor business, a career he continued later in Las Vegas until he retired.

WikiFacts: This nice tribute comes from his Associated Press obit in 2004:


Whether it was on the football fields and baseball diamonds of Long Beach as a youth, in major league club houses as a seven-year big league catcher or in a Las Vegas care facility following a 1993 stroke, Lou Berberet spent his life making friends.

"Especially here in Long Beach, everyone knew him," Tom Berberet said of his father, who passed away [on April 6, 2004] in Las Vegas after six months of heart trouble at the age of 74. "He never went any place where people didn't know him.


Card: Yes, that's a nice big jagged crease cutting across the card from the right edge. The corners are pretty soft as well. I keep a running tab on cards I might upgrade someday. My dealer friend Darrell has a bunch of 1960s in his bargain bin and I always forget to bring my list.
Posted by Commishbob at 2:20 AM