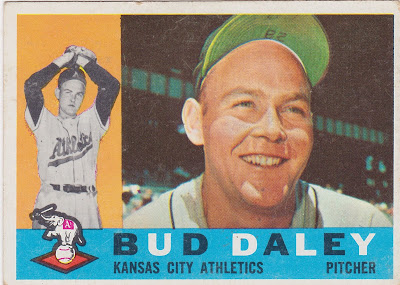 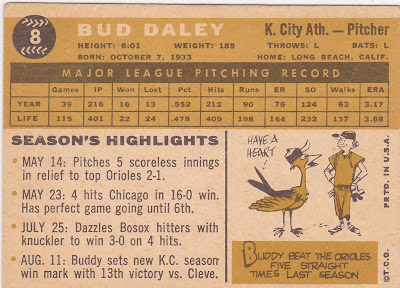 Career: Bud Daley worked his way through the Indians' chain and got a couple of brief (and very unsuccessful) shots in the majors in 1955-56. He had better results with a longer stay in 1957. As the '58 season approached he was traded to the Orioles and then, two weeks later, to the Athletics. He won 39 games in Kansas City with two trips to the All-Star Game before he was traded again, this time to the Yankees, in June of 1961.

With New York, he split his time between the rotation and the bullpen and won two World Series rings. He won the fifth and deciding game of the 1961 World Series with 6+ innings in relief of Ralph Terry.  He developed arm problems and missed much of the '63 season and retired after 1964.

In 1960: This was the second of his two consecutive 16 win seasons for a pretty terrible KC squad. But he also lost 16 games and his numbers across the board we down a bit from '59.


From WikiPedia...When Bud and [his brother] Pete Daley where batterymates in Kansas City, they were know as the only "Daley Double" in baseball. Bud moved to Lander, WY where he and his wife Dorothy, owned B&D Sprinklers, a lawn sprinkler company. As of January 2009, they were retired in Riverton, WY.
Daley's grandson, Jordan Pries, has played minor league ball since 2011, reaching AAA in 2014.


The Card: I must admit that the back's cartoon depiction of the Oriole is amusing.  When I pulled this card for scanning I noticed that it had a lot of gum residue on the front. Most came off but a rubbing alcohol treatment may be in order.
Posted by Commishbob at 11:25 PM