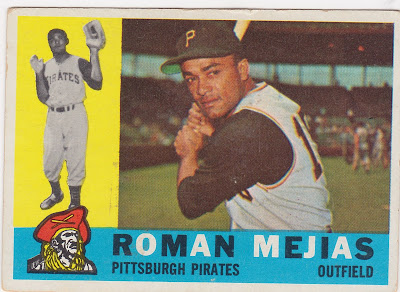 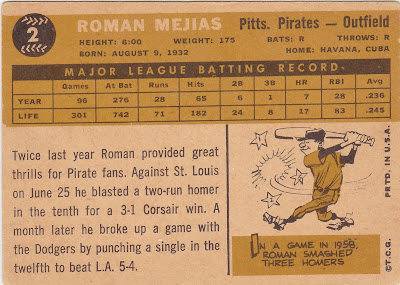 Career: Mejias played in nine major league seasons after debuting with the Pirates in 1955. He was an original member of the 1962 Houston Colt 45s and had his best season that year. He hit 24 homers which is almost half his career total. He finished his career with the Red Sox in 1963/64 and then played a season in Japan. Happy Birthday to him as well. He turned 89 this week.

In 1960: He spent the bulk of the year in the minors and got only one big league at bat. With AAA Columbus he hit .278 and showed some power. Side note: He had only one at-bat with the Pirates in 1961 as well and had almost identical minor league stats.

WikiFacts: From his Wikipedia page:


On October 10, 1961, he was selected in the 11th round by Houston in the 1961 National League expansion draft, and was the starting right fielder in the Colt .45s' first Major League game on April 10, 1962. Batting third in Houston's lineup, Mejías had three hits in five at bats, with three runs scored and six runs batted in. He hit the first home run in Houston's Major League history, a three-run bomb off Don Cardwell in the third inning, and then followed with another three-run shot in the eighth off relief pitcher Al Lary, as the Colt .45s routed the visiting Chicago Cubs, 11–2. Mejías held the Colts' starting right fielder job all season, appearing in a career-high 146 games, and led Houston in hits (162), home runs (24), runs batted in (76), batting average (.286), stolen bases (12) and slugging percentage (.485).

And here's a snippet from a great SABR article on Mejias and his 1954 minor league team, the Waco Pirates. It is recommended reading.

Mejias in particular intrigued the parent Pirates. Born in Central Manuelita on August 9, 1930, he progressed to his third year of high school before going to work at his father’s side at 15 years old. Full of natural ability, he excelled in the Pedro Betancourt Amateur Baseball League in Cuba, and was later signed by Hall of Famer George Sisler who was scouting talent in the area. Mejias showed the propensity for hitting for average and power, had good speed on the basepaths, and played his outfield position ably, all tools which would serve him well on his climb to the big leagues


The Card: Topps liked to refer to the Pirates as the Corsairs. Every time I see that I think of this, one of my favorite doo-wop songs from back when it was my favorite music genre.

Posted by Commishbob at 9:52 AM