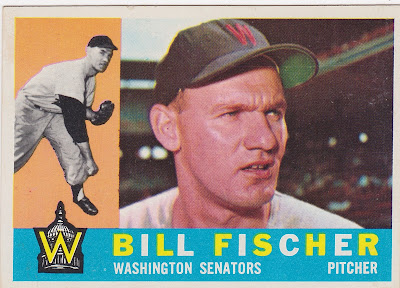 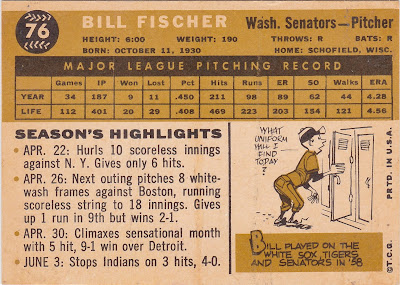 Career: (In a weird coincidence Fischer popped up in the rotation here the same day I posted his card on my 1958 blog. Crazy!) As noted in my other set blog, Fischer was a lifelong baseball guy who pitched for 20 years in pro ball and then turned to every other job in the game after thet. He was an occasional starter in the bigs for four AL clubs, none of which ever got him a post-season shot.

In 1960: He struggled during the first half of the season for the Senators but a late July trade to the Tigers (his second go-round in Detroit) changed his luck and he improved his numbers. He finished 8-8 in 40 games, 20 with each team.

Off The Charts: When he passed away last year at the age of 88 he had just completed his 71st year in pro baseball in a career that began in 1948 as a 17-year old in the White Sox organization.

The Card: That's the old Comiskey behind him. And seeing that Nats logo reminds me of how much I always liked it.
Posted by Commishbob at 10:53 AM