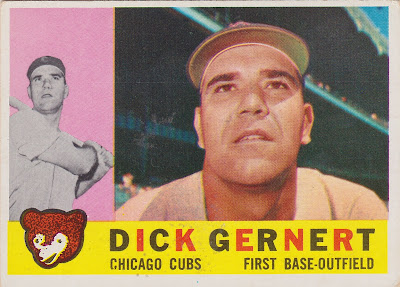 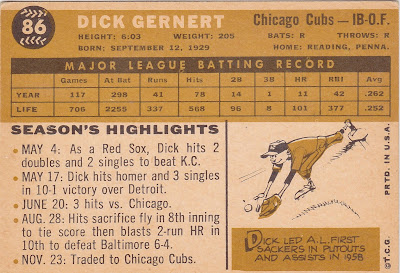 Career: He played eight seasons for the Boston Red Sox as a 6’3″ first baseman-outfielder and then finished his 11-year career with short stints for the Chicago Cubs, Detroit Tigers, Cincinnati Reds, and Houston Colt .45s. He had a few seasons as the BoSox regular first baseman but more frequently he shared the job. He twice had 20 or more dingers and his .291 in 1956 was a career high. He had four pinch-hit appearances in the 1961 Series with Cincy.  He was a Colt .45s expansion draft pick but was released in May which spared him the misery of the Houston summer and mosquitos.

In 1960: He started the year as a brand new Cubbie but was traded to the Tigers with a month to go in the season. His power numbers were down with just one homer in 160+ trips to the plate.

Off The Charts: Per Wikipedia..."He was involved in the first interleague trade without waivers in baseball history on November 21, 1959, when Boston shipped him to the Cubs for first baseman Jim Marshall and pitcher Dave Hillman"

The Card: Pink is a plus, as is the Yankee Stadium facade. He got a Jack Davis cartoon and the 'last entry is a trade note' treatment. Overall, not a bad card.

Posted by Commishbob at 8:08 AM