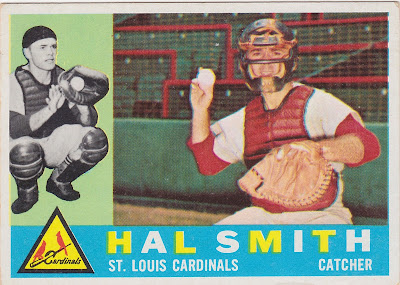 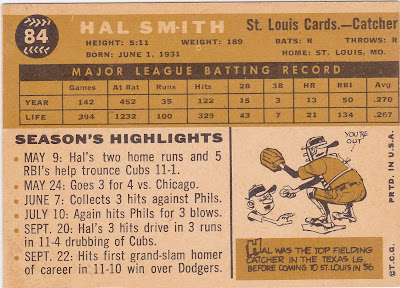 Career: Not to be confused with the OTHER Hal Smith whose card (#48) was posted at the end of January. THIS Hal Smith played from 1956 through 1961 with the Cardinals. He was their starting catcher for much of that time. He was a two-time NL All-Star. His best season was 1959 when he had career-highs in homers and RBI. He got into a few games with the Pirates in 1965 when he was activated for a bit while serving as a coach for the club. He was a coach and scout for many years after his playing days. He is usually differentiated from his namesake by his middle initial, 'R'.

In 1960: Coming off an All-Star season he slid from 13/50/.270/.295 to 2/28/.228/.291 and lost some playing time to Carl Sawatski and several others.
Off The Charts: Even Baseball Reference has problems keeping it's Hal Smiths straight. On various pages, it names BOTH as the uncle of former Padre player Tim Flannery. I believe this Hal Smith is Flannery's relative.

The Card: It's not often you get two photos of a catcher in his gear on a card one of these sets. Having the catcher wearing his mask is even more of an oddity. I really like this one with Smith squatting in Seals Stadium.
Posted by Commishbob at 6:21 PM