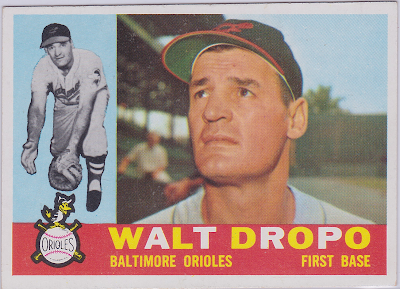 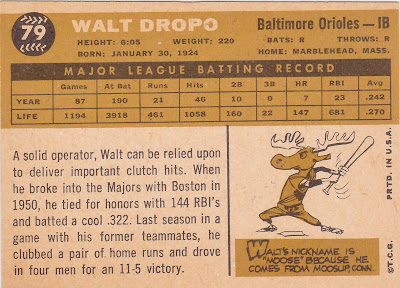 Career: After a three-sport starring role at UConn and an Army stint Walt Dropo exploded into the AL by becoming the 1950 Rookie of the Year with the Red Sox. He wasn't even on the club to start the season. But when he got his call-up he made the most of it by hitting .322 with 34 homers and tying teammate Vern Stephens with 144 RBI for the league lead. He had another fine season in '52 but overall he never could replicate that rookie year. He played 13 years for five clubs and then went into his families' fireworks business.

In 1960: This was his second full season with the Orioles and he got about 180 at-bats but was being pushed aside by rookie star Jim Gentile. He had a decent average (.268) but by the end of May the following season he was out of baseball.

Off The Charts: He was nicknamed 'Moose' for both his size and his hometown of Moosup, Connecticut. He was drafted by the Chicago Bears and the old ABL Providence franchise but chose baseball for both the quick check and his love of the game.

The Card: I like a lot about this one, the colors, the cartoon that references his nickname, and the great portrait shot.
Posted by Commishbob at 4:03 PM