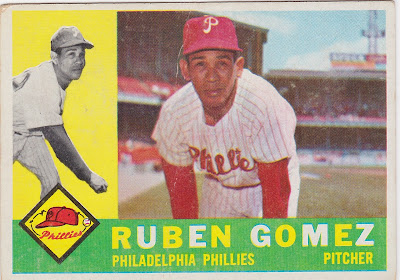 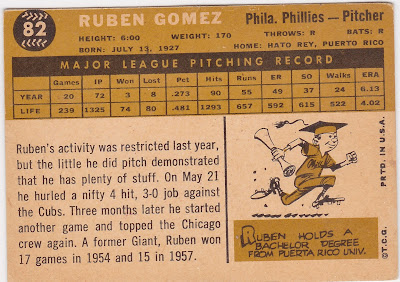 Career: Not enough room to list Gomez' comings and goings through all the many levels and leagues that he was a part of. He was the second Puerto Rican-born pitcher to reach the majors (with the Giants in 1953) and he was the first to pitch in (and win) a World Series game (1954, Game Three). He was also the first major league pitcher to win a game on the West Coast as he led the Giants to an 8-0 win over the Dodgers to open the '58 season. He threw for four major league clubs over ten seasons. He pitched a remarkable 28 seasons in the Puerto Rican Winter League between 1947 and 1977. His NY Times obit is a good place to read about him. It's fuller than his Wikipedia page and shorter than his SABR bio. But whatever you do, check out his career. He was an interesting guy.

In 1960: He opened the season in the Phils' bullpen and was largely ineffective. He was sent to the minors in June and didn't return to the majors until he resurfaced with the Indians and Twins in the second half of the 1962 season.

Off The Charts: This story is found on Gomez' Wikipedia page, and in his SABR bio. Take it for what it's worth:

One day [while Gomez was pitching in the Mexican League in the late 60s] a young boy begged Gómez to buy a lottery ticket that he was selling to make some badly needed money. The boy insisted that Gómez buy the ticket because his uniform number matched that of the ticket, and Gómez, who did not normally buy such tickets, agreed. To his great surprise, the ticket was a winner of a $35,000 prize. Gómez attempted to share the money with the boy's family and when they refused, he went to a local bank and set up a trust fund for the lad, to be given to him at age 18.
...
In 2001, Gómez was hospitalized after a lengthy fight against cancer and was about to receive surgery. A doctor from Mexico requested permission to attend the operation. When Gómez asked the doctor why he had come, he replied, "I was that little boy, the money that you left in trust was enough to pay for my medical school."

The Card: I'm beginning to think three-color cards should have been standard with this set. The green/yellow/white combo plays well with the red of Gomez' uni and the Connie Mack Stadium backdrop. A nice card for sure.
Posted by Commishbob at 9:00 PM