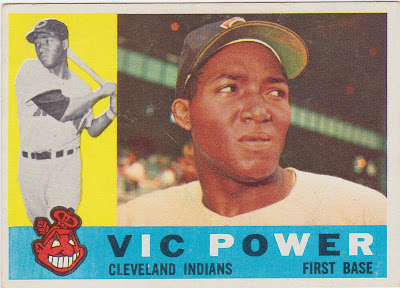 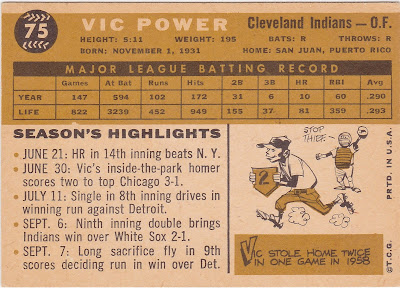 Career: Owner of one of the great names in baseball history, Vic Power emerged from Puerto Rico (as Victor Pellot) to become a versatile, dependable big league star for a dozen years. He was first signed by the Yankees but dealt to the Athletics in 1953, supposedly because of who he chose to associate with (i.e. he dated white women). Power was a four-time All-Star, seven-time Gold Glove winner, and frequent gatherer of MVP votes. In his years with the A's, Indians, Angels, Twins, and (very briefly) the Phils, he hit .284 with 126 homers. Power was primarily a first-baseman but Dodgers general manager Al Campanis once remarked that he was also the best second baseman he had ever seen. Power never had a shot to show his talents in a World Series.

In 1960: He had a career-high 84 RBIs to go with his 10 homers and .288 average. He was inserted into the 2nd of two All-Star contests and had a pair of fly-outs and made five putouts at first.

Off The Charts: Luis Mayoral, Power's friend, and a blogger for the Hall of Fame wrote: I asked Vic if he enjoyed reading and he responded, “Reading is my hobby. Books are my best friends. I take pride in my career in baseball, but I’m also very proud of being a good photographer.”

The Card: Nice color combo on this one. Not many 'long sacrifice fly' references among the highlights lists in the 1960 set. Final thought...I wish I had a buck for every time Topps used the 'Stop Thief' bit in a card cartoon!
Posted by Commishbob at 8:31 PM