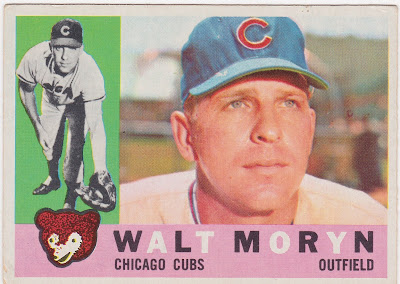 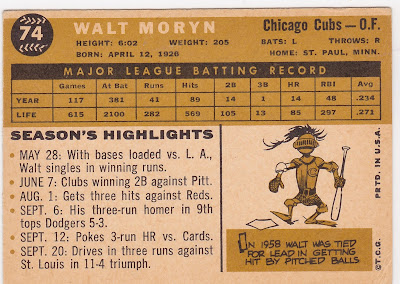 Career: Moryn played eight years in the Dodgers' chain before getting his ticket punched for a ride to Wrigley and an everyday spot in the Cubs' outfield. He had home run power and a big arm which led to league-leading assist numbers. He made the All-Star squad in 1958. After his time with the Cubs, he played part-time roles for a few seasons for the Cards and Pirates and retired in 1961.

In 1960: Moryn was hitting almost .300 when he was dealt at the trade deadline to the Cardinals. This came a month after his shoestring catch was the last and biggest out of Don (This Is My First Cub Start) Caldwell's no-hitter. He didn't maintain his average in St. Louis but he did end up with 13 homers and hit .264 for the season.

Off The Charts: SABR sez: "...Moryn will be remembered best for one outstanding moment in a Chicago uniform. It came on Sunday, May 15, 1960, when Moose made “the catch” that preserved a no-hitter for teammate Don Cardwell."

Also worth noting....he is another Navy vet who saw action in the Pacific.

The Card: Has that Wrigley Field vibe even though the background in the photo is obscured. Sometimes four colors are one too many. That's the case here. Highlights list shows he had a big September in '59 and the cartoon is a good one.
Posted by Commishbob at 7:00 AM