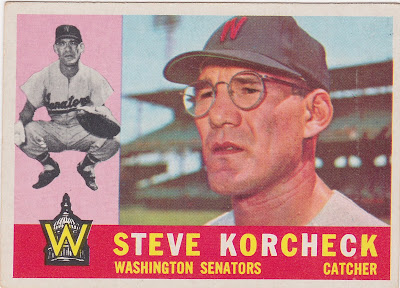 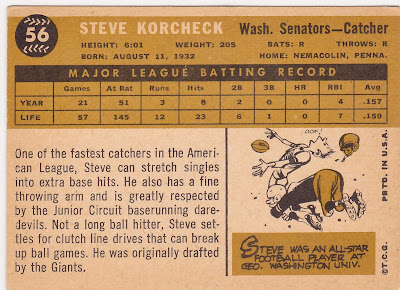 Career: After playing football and baseball at George Washington University he played in 58 games for the Senators over parts of four seasons which bracketed a two year Army service stint. He hit .159 for his career.

In 1960: This was Korcheck's last season as a pro and he spent it with the Nats' AAA affiliate in Charlotte. In a three-way platoon, he hit .230 with five homers.

Off The Charts: From his obituary..."[He] was drafted by the San Francisco 49ers but chose to play baseball with the Washington Senators. And for most of his life, Steve was an avid golfer, satisfying his competitive fires while greatly enjoying the camaraderie of friends.'

'After his baseball career, Steve returned to George Washington [University] and earned Master’s and Doctoral degrees while managing the baseball team."

Personal note..he was playing at GWU when my father was a student there.


The Card: I normally like cards that have pink elements but the pink/red/yellow doesn't do much for me. That's the old Comiskey in the background.
Posted by Commishbob at 9:32 PM