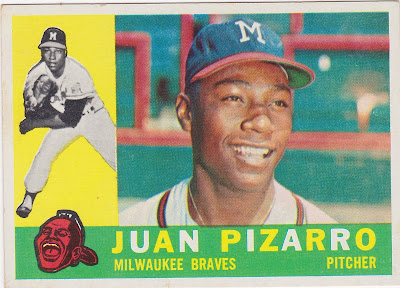 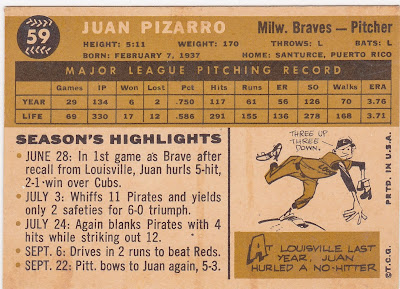 Career: He pitched for eight clubs over a span of 18 seasons and had a career that is often overlooked. His stats (131 wins, a sub 3.80 ERA and a good WHIP land him in the 'Hall of the Above Average' His best seasons came in 1963 and '64 with the White Sox and he made the All-Star teams in those two years. He won a ring with the '57 Braves and appeared in the '58 Series with them as well.

In 1960: In his final season of four with the Braves he saw his stats (and workload) decline. He appeared in 21 games (17 starts) with a 4.55 ERA. He was dealt to the AL champion White Sox in a three-team deal after the season. The trade brought Roy McMillan to the Braves from the Reds.

The Card: Another Seals Stadium shot with a nice color combo and the colorful Braves cap. I'm partial to Pizarro cards and have a nice PC of him.
Posted by Commishbob at 2:20 AM