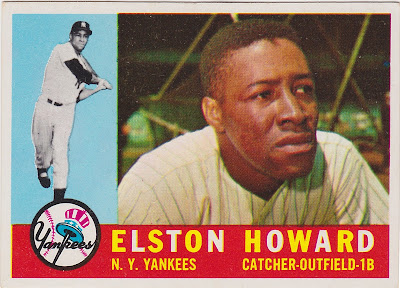 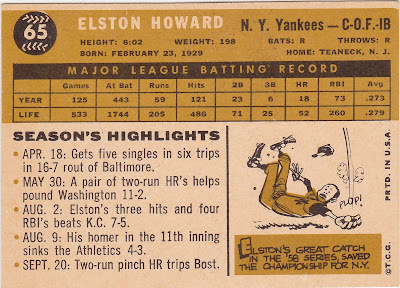 Career: Elston Howard had a terrific 14 season career. He broke in with the Yankees in 1955 playing a lot of outfield since Yogi Berra was entrenched behind the plate. A few seasons later the catching job was Howard's for good. He was the first black player to take the field for the Yankees and the first black player to win the AL MVP. He made nine consecutive AL All-Star team and made 10 World Series appearances including his part as a veteran leader of the '67 Impossible Dream Red Sox. He won four rings and a couple of Gold Gloves along the way.

In 1960: He struggled with injuries and played in only about 100 games. His .245 average and reduced power reflect his struggles in 1960. He was two seasons away from his '62 MVP year. But he was sufficiently recovered from a last-day-of-the-season sprained finger to go 6 for 13 with a homer and four RBIs in the 1960 World Series. Ironically, a Bob Friend pitch in Ellie's first at-bat in Game Six of the Series broke one of his fingers.

Off The Charts: Ellie owned a travel agency in Nutley, NJ while I was growing up there. He was the first ballplayer I met in person. He also created the weighted 'donut' batters have used in the on-deck circle ever since.

The Card: Really nice color combo. But I have to wonder why Ellie was shown cap-less. it's not like he's with a new team. I do like cards which show the batting cage in the background. I no longer get to games early enough to watch BP but back in the day my father considered it mandatory.
Posted by Commishbob at 10:40 AM