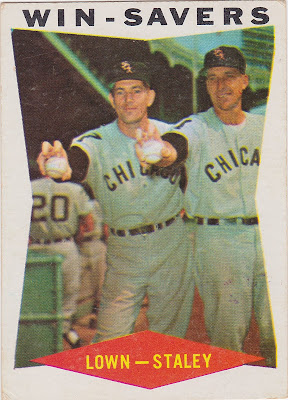 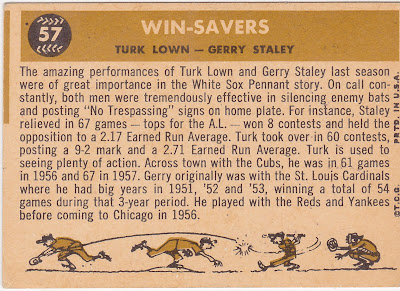 In 1960: Following up on their AL title season that is documented in the card's text, these two relievers had solid years. Staley went 13-8 over 64 relief appearances with 10 saves while Lown added five saves.


The Card: A lot of these combo shots from vintage Topps sets feel like they were included just because they had a picture sitting around. This one had some reasoning behind it. Staley and Lown were a valuable 1-2 punch for Al Lopez in 1959.

Nice Yankee Stadium shot. #20 in the background Johnny Romano. He was the only White Sox player to wear that number in 1958/59, the two years that Lown and Staley were there prior to the card being issued.

The back is seriously mis-cut. But that sure isn't enough to warrant an upgrade.
Posted by Commishbob at 12:13 AM