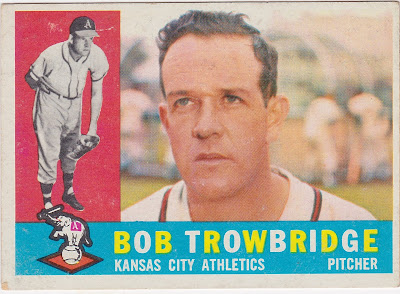 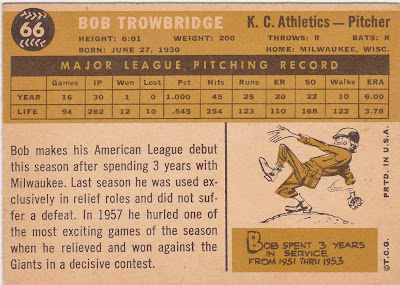 Career: Beginning in 1951 he had an outstanding minor league career which bracketed a 3-year military stint. He finally reached the Braves in 1956. He mostly pitched out of the bullpen for all or part of the next four seasons in Milwaukee and for one year in KC. He was 13-13 with a 3.95 ERA in 116 games. He made 25 starts along the way. He pitched one (very rocky) inning in Game Three of the 1957 Series against the Yankees.

In 1960: After being purchased by the A's the previous October, Trowbridge pitched with limited success thru July in KC before he was farmed out. He finished the 1960 season in the minors and spent 1961 there as well and then retired.

Off The Charts: After he retired Trowbridge returned to his native Hudson, N.Y. and worked in the prison facility there.

The Card: This is the second in a string of capless card subjects. Unlike the previous Elston Howard card, this one shows a player who changed teams prior to the 1960 season. Love the colors and the old A's logo is fun.
Posted by Commishbob at 4:08 PM