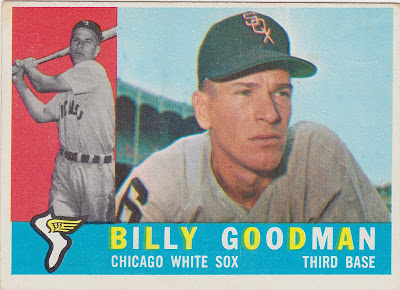 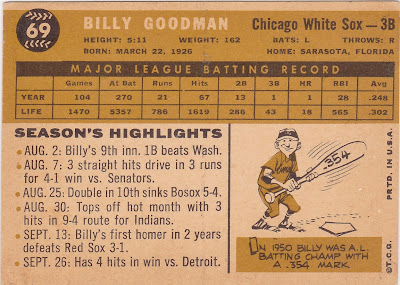 Career: Goodman had a 16-year career which had gone largely under-the-radar given what he accomplished. He played for 11 seasons with the Red Sox and won the 1950 batting title with a .354 mark. He finished second (to Phil Rizzuto) in the MVP voting that year. Overall, in 17 seasons with Boston, the White Sox, Orioles and expansion Colt 45s, he had a career .300 average and played every position except pitcher and catcher. He was twice an All-Star and he picked up MVP votes in six seasons. He had three hits and an RBI in the 1959 Series.

In 1960: His career was beginning to wind down and he was little used by Al Lopez in '60 as he got only 77 at-bats. He was left available in the AL expansion draft after the season but went undrafted.

Off The Charts: After his big league days he became the player/manager of the Durham Bulls and pitched a bit for them. That meant that the only position he hadn't played as a pro was catcher.

The Card: Classic White Sox card with Goodman sporting that cap with the red-outlined lettering (I love that one) and the TV sleeve numbers. He's at Yankee Stadium and the card has a sweet color combo. And, hey, howdy, hey...he's wearing a cap!
Posted by Commishbob at 1:50 AM