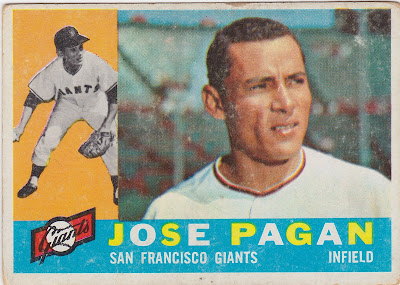 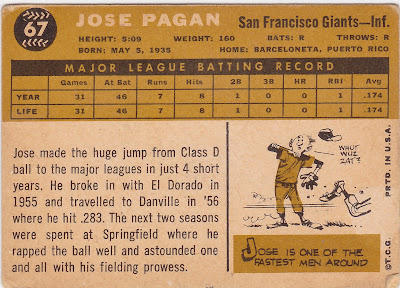 Career: He played 15 seasons in the majors beginning with a taste of the bigs in 1959. The largest chunk of his career was split evenly between the Giants as the starting shortstop,  and Pirates platooning at third. He was steady at the plate (.250 career average) and in general a decent glove guy. He led the NL shortstops in fielding in 1962. He played in two World Series and won a ring with the '71 Pirates. He homered in the '62 Series and his double in Game Seven in 1971 drove in the winning run. He finished his career with a stint on the Phillies in 1972.

In 1960: He started the season with the Giants and got in a few pinch-hitting assignments before heading back to AAA. He was back up in September and started at short for the last few weeks on the season and hit well enough (.286) to establish himself as the starter going forward for the Giants.

Off The Charts: "During a 1971 interview with the Sporting News, Pagan had revealed that he often “managed” games in his own mind from the Pirates’ bench. “I think to myself the type move I might make in a certain situation,” Pagan explained. “I think that’s common among ballplayers, especially those who are thinking of staying in the game. I think it’s important for a manager to be an inning ahead in his thinking during the game.”

The above quote comes from a Baseball Hall of Fame page that highlights Pagan's 1972 Topps card and his career in general.

The Card: A third consecutive capless player card. Pagan had been in a Giants uniform in 1959 long enough to have posed for pics so it seems odd that Topps chose a capless one for this card. The red railings identify the photo as being from Seals Stadium.
Posted by Commishbob at 3:44 PM