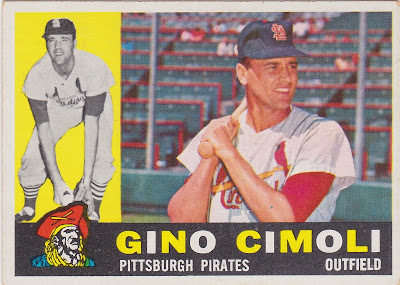 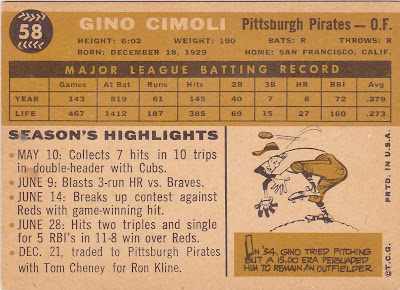 Career: He had an impressive minor league career in the Dodgers' chain but it was hard to move up in that stocked system. He debuted in Brooklyn in 1956 and went on to play for seven clubs over ten seasons. A .265 career hitter, he led the AL in triples in 1962 and in assists by an outfielder in '63. He made the NL All-Star team in 1956 and played in one game of that year's World Series.

In 1960: He was with his third club in as many years but was just in time to help the Bucs win the Series. As the team's fourth outfielder (behind Skinner, Virdon and Clemente) he hit .267 but his biggest moment came in Game Seven of the Series. He got a pinch single to lead off the bottom of the eighth inning that started the rally which put the Pirates in the lead (which they soon blew before they celebrated Mazeroski's famous homer).

Off The Charts: From Wikipedia...After retiring from baseball, Cimoli worked as a delivery driver for United Parcel Service where, in 1990, the company honored Cimoli for completing 21 years of service without a traffic accident. Cimoli, then 60 years old and still working for the company, was now referred to as "The Lou Gehrig of UPS."

He was the first player to bat in a major league game in California when he stepped into the box for the Dodgers at Seals Stadium on April 15, 1958, against Ruben Gomez and the Giants. He fanned, btw.

The Card: The picture is from 1959 and was taken in the park where he had made that first-in-history West Coast at-bat, Seals Stadium in San Francisco. Cimoli's card comes just a few numbers after Bill Mazeroski's and tells us that it was revised after the trade that winter.

Also revised was the last entry in his highlights list...The December 21 trade is shown and the font is just a bit lighter than the lines above it. I crawled down the rabbit hole and I've decided that the trade entry replaced one for his game on July 12 when he went 3 for five, homered, and then drove in the eventual winning run in the top of the tenth with a single to beat the Pirates. The single actually occurred a month later since the game (the second half of a doubleheader) had been suspended in the top of the ninth. So I'm guessing that the last entry originally looked like this: