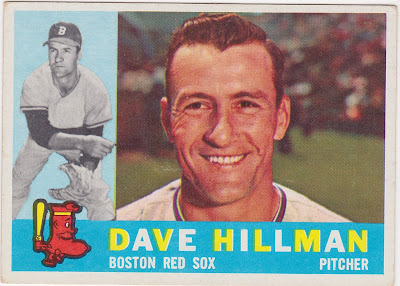 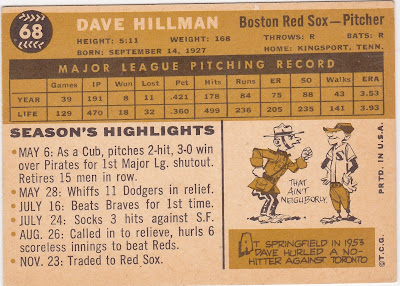 Career: He was an Air Force vet playing weekend ball when the Cubs signed him. He had outstanding minor league seasons which he could never replicate in the bigs. His 8 wins in 1959 were a career high but not enough to prevent him from being traded to Boston. Overall he won 21 games spread over parts of eight seasons. In 1962 he had been traded from Boston to the Reds who, after two shaky games, returned him to the Red Sox. The Sox dealt him to the fledgling Mets and he finished his career there that season.

In 1960: Hillman spent long stretches on the DL beginning in spring training and ended up only pitching 36 (very rocky) innings that year.

Off The Charts: His sporadic use in 1960 first came as the result of a car wreck which is detailed in his SABR bio:

His Red Sox career almost ended before it began. A spring training headline out of Scottsdale read: “Hillman Career May Be Ended By Car Injuries.” Early in the morning of March 10, the automobile Marty Keough was driving reportedly hit a soft shoulder and rolled over five times before coming to a stop. The AP report said the accident occurred at 1:15 AM but the two players claimed it happened at 12:35 AM and that they would have otherwise made it back to the Safari Hotel before the 1:00 AM curfew. They were traveling 70 mph in a 45-mph zone, and the car was demolished after skidding over 600 feet and landing on its roof. Keough was shaken up, but Hillman required seven stitches in his head and badly bruised his right shoulder. Manager Billy Jurges chose not to penalize them. Hillman showed up later that day, his arm in a sling.7 He returned to action on April 16.


The Card: Yet another capless player, the fourth in a row to be posted. At least Topps had a reason for Hillman's pic. He had been traded by the Cubs to the Red Sox over the winter. And there's a bit of irony here with the cartoon showing 'Hillman' and an RC policeman given his 1960 wreck. Bonus points for the transaction being listed as a highlight bullet point.
Posted by Commishbob at 1:00 AM