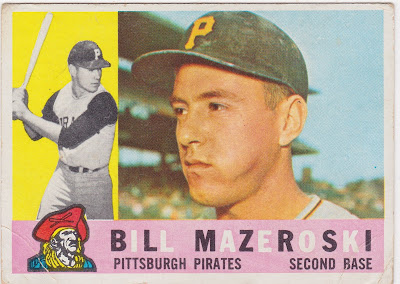 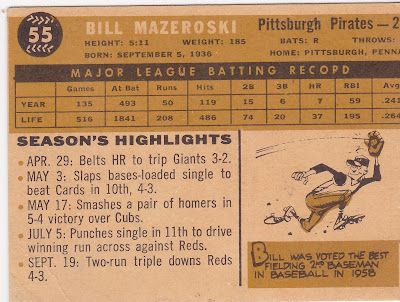 Career: Maz was a 2001 Hall of Fame inductee via the Veterans Committee. He was originally signed by Branch Rickey as a shortstop. He went on to fame as an outstanding glove man and through his legendary homer that won the 1960 Series.  He player 17 big league seasons, all with the Pirates and was a seven time All-Star and eight-time Gold Glave winner.

In 1960: He hit .273 which was close to his career high and made the All-Star team. Of course that digneris the only hit he really needed to make a name for himself and carve out a spot in baseball lore.

Off The Charts: Maz also homered in Game One of the 1960 Series and had a .323 career postseason batting average.

The Card: It's really a classic...the chaw, Wrigley Field, pink/white/black bottom block. Gotta love this one.
Posted by Commishbob at 4:06 PM