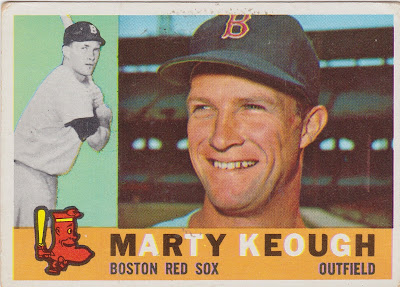 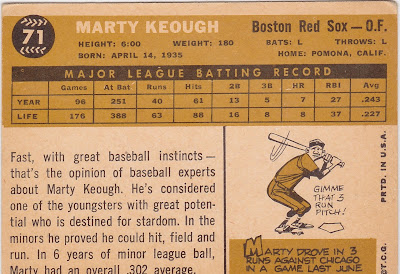 Career: He spent six seasons in the minors and hit well everywhere he stopped but he never could sustain that in the majors. He carved out a long (11 seasons) career as a defensive late-inning replacement and/or fourth outfielder. The only year he approached full-time starter status was in 1961 with the new Washington franchise. He played for the Reds, White Sox, and Braves, Red Sox, Nats, and Indians. He was a scout for the Cardinals until recently.

In 1960: After 38 games and a bit over 100 at-bats, Keough was hitting .248 and maybe in need of a change. In mid-June, he was traded with Ted Bowsfield to the Cleveland Indians for Carroll Hardy and Russ Nixon. Over the rest of the season with the Indians, he hit .248 proving that he was nothing if not consistent. Nixon, meanwhile, hit .298 for the year and solidified the Sox' catching situation. The Indians allowed him to be taken by the Senators in the expansion draft after the season.

Off The Charts: "He comes from a baseball family: he is the older brother of Joe Keough, a former MLB outfielder, and father of Matt Keough, a right-handed pitcher who was a 16-game-winner for Billy Martin's 1980 Oakland A's. Matt also played in Japan, making them one of the few American father-son duos to both play there." -Wikipedia

The Card: The seafoam green isn't really common in this set. It was more popular in Topps' '59 set. Mixed with the orange/black/white...not doing much for me. Nice Comiskey background though. The write-up really sings his praises