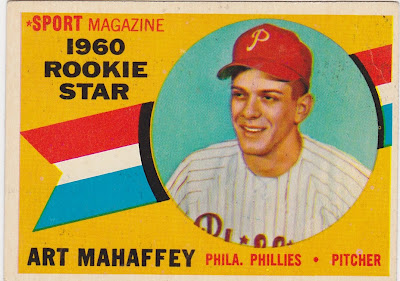 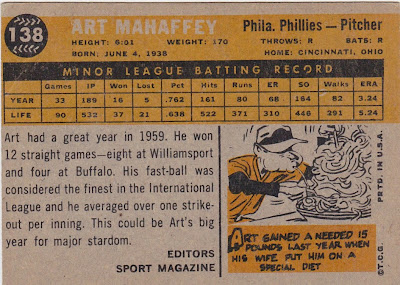 Career: After steadily improving his numbers over a four and a half year minor league stint Mahaffey pitched for all or parts of seven seasons, mostly for the Phils. He finished with a short stay with the Cards. He was 59-64 for his career, ( he won 19 of those in 1962) making two All Star Squads.

In 1960: Mahaffey began the year in the minors but got a late July call-up. He soon was in the rotation for the Phils and pitched remarkably well. He appeared in 14 games making 12 starts. Only one of those starts could be called 'poor'. The other 11 would qualify as 'Quality Starts' using the current meaning of the term. His 7-3 record is complimented by a 2.31 ERA.

WikiFacts: He picked off the first three players who had base hits against him: Curt Flood and Bill White of the St. Louis Cardinals (July 30, 1960) and Jim Marshall of the San Francisco Giants (July 31, 1960).

On April 23, 1961, struck out 17 Chicago Cubs to set a Phillies team record. He also tied the since-broken National League record for most strikeouts in a day game.

In 1962, Mahaffey became the last pitcher to strike out at least 12 batters and hit a grand slam in a game.

The Card: Love these orange rookie stars! Mahaffey looks very young in this one, doesn't he? This copy is in fair condition, off-center with soft corners. Pretty much typical of the cards I picked up in the large lot I started my collection with.

Posted by Commishbob at 9:13 AM