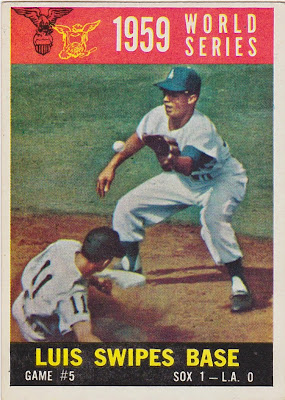 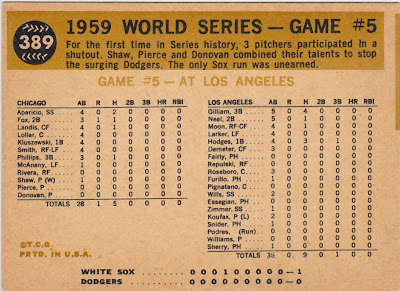 The Card: This is the first I've posted of the World Series subset that chronicles the 1959 Dodgers' championship. One card was issued for each game and a seventh shows the Dodgers 'celebration and has Series total stats on the back. The cards use painted game action photos.

This one, purportedly showing Game Five action has Luis Aparicio of the Sox sliding into second with a steal while Maury Wills takes the catcher's late throw.

Interestingly the action shown is actually from Game Four of the Series. Corbis' website had the original image and caption. The photo is dated October 5. And that's the date of Game Four in which Aparicio walked and stole second to lead off the top of the first. 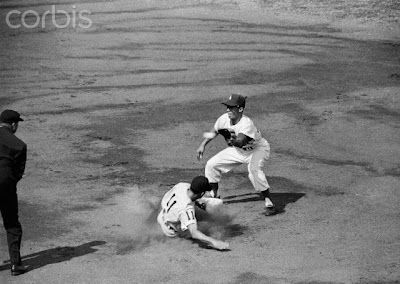 Original caption: Luis Apariclo, Sox ss, steals second in the first inning after getting on base with a walk. John Roseboro's throw to Maury Wills was late. Note ball just reaching Wills glove.

In a further bit of ironic card trivia Maury Wills was famously not included in Topps sets of the day. He wasn't offered the standard Topps $5 contract and by the time he made a splash in the majors he had signed an 'exclusive' contract with Fleer. If you want some background on this the LA Times had a nice article in 2011.
Posted by Commishbob at 6:30 AM