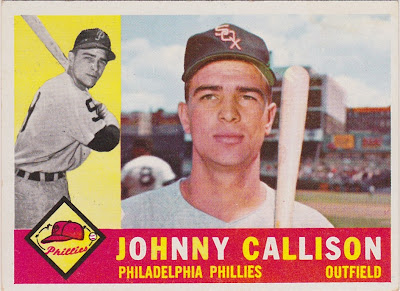 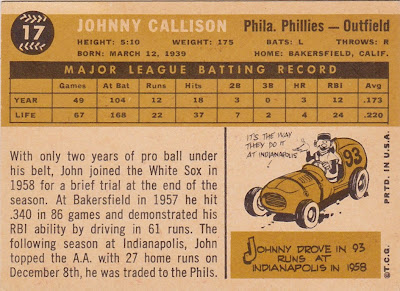 Career: Callison was a solid major leaguer who spent the best part of his career in the decade he played in Philadelphia. He made three All Star squads and was the runner-up in MVP voting in 1964. He came up with the White Sox and after his days in Philly he returned to Chicago as a member of the Cubs for a couple of seasons. He then finished up with the Yankees. He never played in the post-season coming close twice. He was with the '59 pennant winning White Sox but wasn't on the World series roster. The '64 Phils had that epic collapse in '64 which wiped out his best shot at a Series.

In 1960: This was his first year in Philly having been traded from the White Sox for Gene Freese the previous winter. He took over an outfield slot for the Phils and hit .266 with nine homes in 138 games. He was still a couple of seasons away from becoming an All Star for the Phils.

WikiFacts: In 1964, at Shea Stadium in New York, he hit a game-winning home run in the All Star Game off Dick Radatz.

The Card, etc: The photo showing Callison in his Sox uni is fine with me. I'd rather that than a crappy airbrush job. The Yankee Stadium scoreboard and stands with the apartment buildings beyond make this a memory inducing card. The red/yellow/white combo is a good one. The cards with four colors (see Rocky Bridges from my last post) are more 'over the top' I think. Ray Boone wore #8 for the Sox in 1959 so that must be him in the background. It's not likely to be a shot from 1958 since the Sox didn't play at Yankee Stadium after Callison was called up.