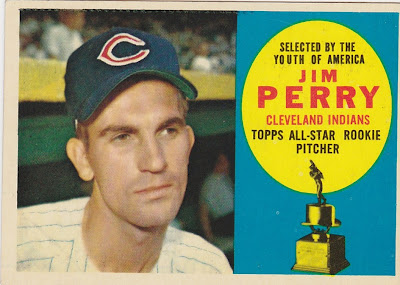 Career: Older brother of Hall of Famer Gaylord Perry he pitched for 17 seasons in the American League. His longest tenure came with the Twins. Over ten seasons with Minnesota he was 128-90 with a 3.15 ERA. He pitched seven seasons (over two stretches) with the Indians and one each with Oakland and Detroit. His 24 wins and 3.04 ERA in 1970 won him the Cy Young Award and he helped the Twins to three post season berths including the 1965 World Series.

In 1960: Coming off a rookie campaign that earned him second place in the ROY voting he had a great season making a league high 36 starts for the Indians. He led the league with 18 wins and four shutouts.

WikiFacts: The Perry brothers are the only set of brothers to both win Cy Young Awards. Jim's son, Chris Perry, is a professional golfer who has won a tournament on the PGA Tour.

The Card: This is another subset within the 1960 Topps set. These Topps All Star Rookie cards feature players who excelled as rookies in 1959. It's the first time the great 'Top Hat' Rookie trophy appears on Topps baseball cards. I think it's the best 'add on' to a card ever. You can see them all on this site. There were ten all told in the 1960 set and they run from #316 (Willie McCovey) thru #325 (Jim O'Toole).

You can see that the 'Season's Highlights' section on the back list the October 29 date as Perry having won the Topps Rookie Trophy. I wonder if it was the date of some post-season banquet or just the date the awards were announced. The front claims that the ten players were "Selected by the Youth of America". I was a 'youth' in 1960 and don't recall getting a vote.

Baseball Reference gives some background and history of the award winners.
Posted by Commishbob at 7:00 AM