#160 Rival All Stars (Mantle & Boyer) and some set background 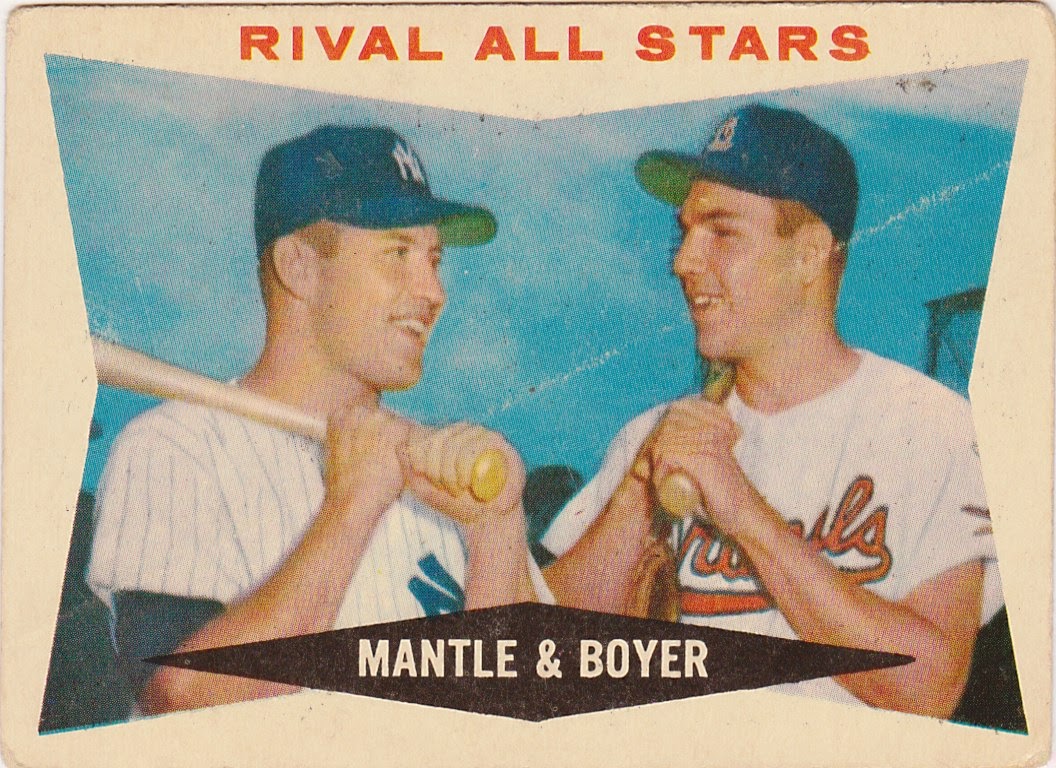 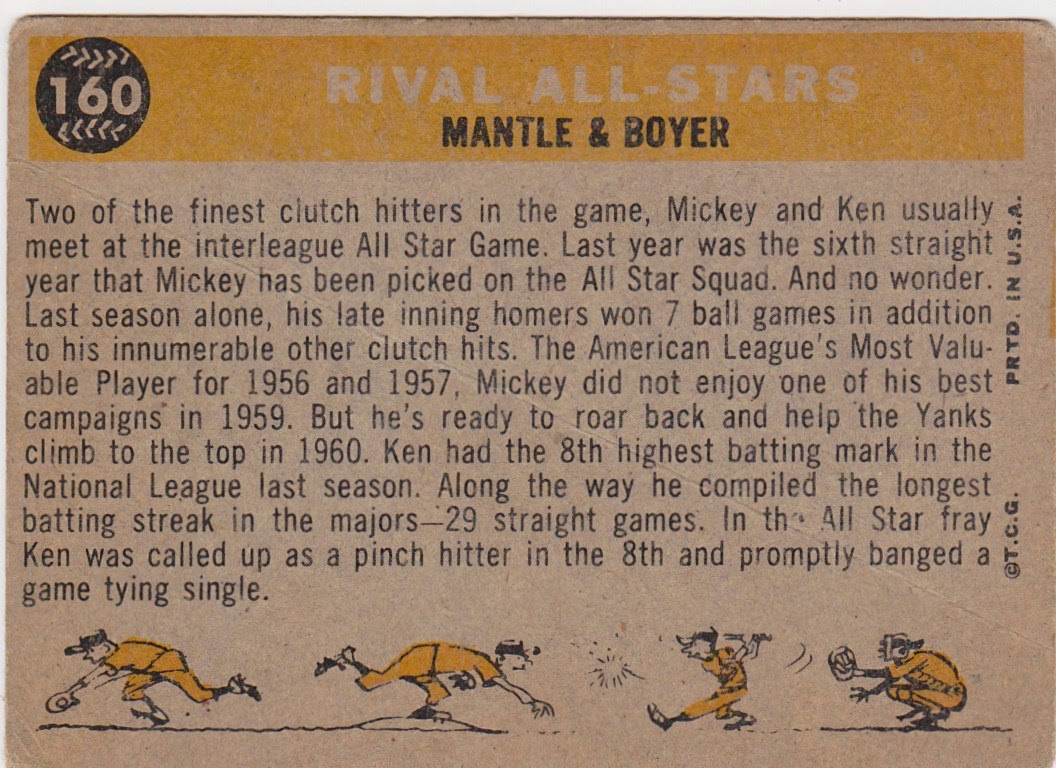 The Card: This is the first of the ten multi-player 'specials' in the 1960 set. Mickey Mantle, looking impossibly young, exchanges pleasantries and a smile with Cardinal Ken Boyer. Four years after this card was issued the two would face off in the 1964 World Series. Mantle would outhit Boyer but the Cards took the title in seven.

Ken Boyer, brother of Mantle's teammate Clete and Cloyd, a Cardinal pitcher in the early 50s, was a seven time All Star and the 1964 NL MVP. In 10 All Star games he had two dingers and batted .348 in 23 at bats.

My copy obviously isn't pristine but it came cheap. I am going to pick up nice copies of the two other Mantle cards in the set so condition on this one wasn't a priority. The crease that shows up in the scan above isn't really visible when the card is sitting in the page pocket.

I recall specifically having this card when this set was new. I know Topps had multi-player cards previously, as far back as 1957 at least, but this one sticks out as the one I loved having in my cigar box.
__________________

Before I get too far into the set I figured a bit of background would be appropriate.

The 1960 Topps set had, like the '59 set, 572 cards. They were issued in seven 'series' with the final one having somewhat limited distribution and is therefore more expensive to complete. The key rookie cards from this set include #136 Jim Kaat, #148 Carl Yastrzemski, and #316 Willie McCovey. Among my favorite aspects of the set is the great assortment of subsets it contains:
In addition each team was featured on a 'team' card with a checklist on the reverse. The checklist references the series that contains the team card. Speaking of the 'reverses' I've mentioned before that the gold/orange and black printing on that cream colored cardboard is my absolute favorite among all of Topps' vintage cards.

The cartoons, by Jack Davis who is known for his work on Mad magazine and many other places, are another strong point. As an aside, Mr. Davis just retired last December. He was working at the age of 90! A story about his retirement is here and you can see some of his work on this page..

But, back to the set......I'm particularly enamored with the Rookie Stars (love the orange!), the managers (I've blogged that group) and the Sport Magazine All Stars that close out the checklist.

Topps had first used the horizontal format in 1955 and 1956 and revived it in 1960. They would never again issue a flagship set with primarily horizontal cards. Two subsets, the managers and coaches, were formatted vertically.

In addition to black and white Topps used eight colors on the card fronts: blue, red, yellow, orange, light green, light blue, pink, and dark green. The cards came in one- and five cent wax packs. I don't think I ever saw a penny wax pack. They also came in cello packs. Those I remember.

As time goes by and I find out more about this wonderful collection of cards I'll include items of interest here. Like the 1959 set this one is growing on me as I fill in the binder pages with the colorful cards. I hope you'll keep checking back.
Posted by Commishbob at 7:15 AM