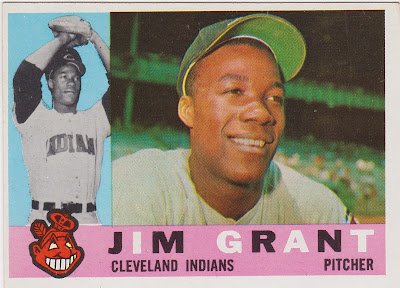 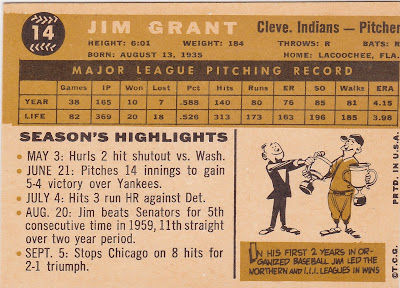 He was twice an All-Star and made three starts in the '65 Series versus the Dodgers. In that Series he got complete-game wins in Games One and Six while taking the loss in Game Four. That Game Six win came on two days rest. He also started the first game in Montreal Expos history in April 1969.

Grant was well known as a singer and entertainer and hosted a local TV program in the Minneapolis area in 1965. At the bottom of this post I have embedded a video of Grant signing at a tribute to the late Harmon Killebrew (accompanied on guitar by Tony Oliva's son).

In 1960: In his third season in the majors Grant's numbers took a slight downturn from his previous two. But the most notable thing about the 1960 season for him was something that occurred that September that seems remarkable for the time and certainly connects to the current political climate. I don't believe I'd ever heard about this incident until I was researching this post. And I thought I knew a little something about Jim Grant.  Click here to read about the national anthem performance that ended his season in an article that appeared last October in the Tampa Bay Times.

WikiFacts: Also contained in that article in the Tampa Bay Times :

The two-time All-Star was the AL's first black pitcher to win 20 games (for the Twins in 1965), and there's a street named after him in his hometown. His legacy includes two nephews (Troy and Darren Hambrick) who played in the NFL.

He was also the first black pitcher to win a World Series game for an AL team (Twins, 1965).

In recent years, Grant has dedicated himself to studying and promoting the history of blacks in baseball. On his official website, Grant pays tribute to the fifteen black pitchers (including himself) who have won 20 games in a season. The "15 Black Aces" are: Vida Blue, Al Downing, Bob Gibson, Dwight Gooden, Grant, Ferguson Jenkins, Sad Sam Jones, Don Newcombe, Mike Norris, David Price, J. R. Richard, CC Sabathia, Dave Stewart, Dontrelle Willis, and Earl Wilson. In 2006, Grant released his long-awaited book, The Black Aces, Baseball's Only black Twenty-Game Winners, featuring chapters on each of the black pitchers to have at least one twenty win season, and also featuring Negro League players that Mudcat felt would have been 20 game winners if they were allowed to play. The book was featured in the Hall of Fame during Induction Weekend 2006, and in February 2007 President Bush honored Mudcat and fellow Aces, Ferguson Jenkins, Dontrelle Willis and Mike Norris, and the publication of the book at a ceremony at the White House.

The Card: This is just a terrific card. I love cards that have pink as part of the design. Add to that there is a neat Jim Davis cartoon, the Season's Highlights block and the fact that it's The Mudcat! Good stuff.