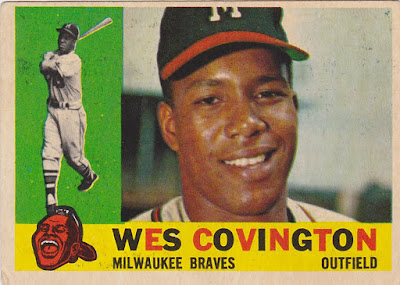 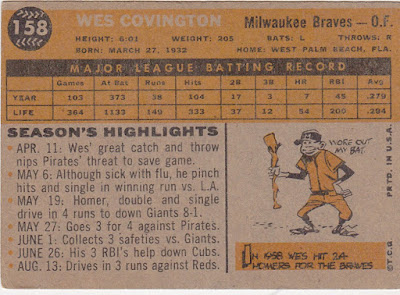 Career: Over 11 seasons he played in 1075 games, all but 39 of them in the NL (see below). He was a solid if unspectacular player who had multiple double digit homer seasons. In 1958, his best year, he had a slash line of .330/.380/.622. He appeared in three World Series, winning a ring with the 1957 Braves. I became aware of him when he was part of the Johnny Callison-Tony Gonzalez-Wes Covington outfields that the Phillies had in the early 60s and that I rooted for at Shea Stadium against the Mets.

In 1960: This was his final full season with the Braves. After hitting .294 with an OPS of .840 in his first four seasons his numbers and playing time slipped a bit. Early the next season he was waived.

WikiFacts: From my 1959 Topps blog Covington post: "He had a whirlwind 1961 season as he became one of only nine players in MLB history to play for four different clubs in a season. He opened the year with the Braves, was claimed on waivers by the White Sox in May, was dealt to the A's in June and traded again to the Phils in July. I hope he didn't sign any long term leases that summer."

Here is the Baseball Reference listing for his travels in 1961:

May 10, 1961: Selected off waivers by the Chicago White Sox from the Milwaukee Braves.

July 2, 1961: Traded by the Kansas City Athletics to the Philadelphia Phillies for Bobby Del Greco.

The Card: I've been casually collecting Covington cards, his 1961 Topps is my favorite. This one has a nice color combo and a smiling portrait of Wes. The front has some gum residue which I really should remove. The back references two of the better 'season's highlights' I've come across. The first one is a rare reference to a defensive gem and the next mentions his having the flu but still getting a pinch hit. What a trooper!

Wes Covington was an interesting guy, well spoken, outspoken and talented. His SABR is highly recommended. You can read it here.

This is a blurb from it.

As a young player, Covington was thought to be in Aaron’s class. His skill and potential were so boundless that Aaron, in reference to the Eau Claire team, wrote in his autobiography, “At that point, if people had known that one of our players would someday be the all-time major league home run leader, everybody would have assumed that Covington would be the guy.” It was not to be. Covington’s injuries and outspokenness combined to keep his potential from ever being fully unlocked. The Phillies Encyclopedia put Covington’s career succinctly, stating, “Wes Covington lasted 11 years in the major leagues because of a bat that made a lot of noise and in spite of a mouth that did likewise.... (He) specialized in long home runs and long interviews that tended to get people around him a bit testy.”

Posted by Commishbob at 7:54 AM