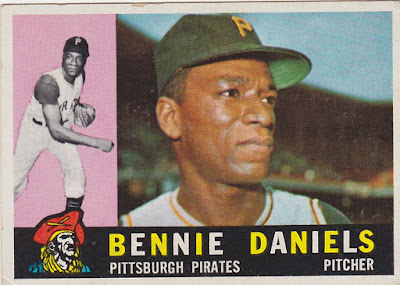 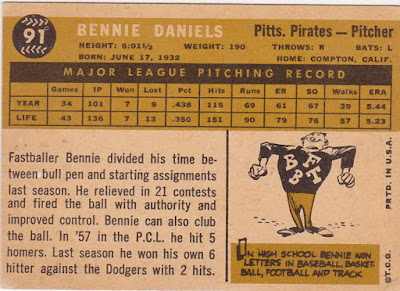 Career: After a couple of underwhelming years in the Pirates' chain ('51/'52)  Daniels did a stint in the military and then returned to pitch in the minors for the better part of four seasons with much more success. He debuted in late 1957 (see below) and won a spot on the Pirates' staff in 1959. After two underwhelming years he was dealt to the Senators in a trade that brought Bobby Shantz to the Buccos. Daniels had a fine first year in Washington but never could repeat it. He retired after the 1966 season which he spent in the minors.

In 1960: He divided the season between the Pirates and their AAA Columbus club. He had started the season in the Pirates' rotation but by June he had lost that spot, was unable to right himself in the bullpen and was farmed out. he ended up 1-3 with some pretty brutal numbers.

WikiFacts: From the Institute of Sports, Media and Society's blog comes this Bennie Daniels backstory:

Ebbets Field is the nirvana, the heaven, the Elysian Fields of corporate memory for all those baseball fanatics too young to have attended a game there.  But, let me tell you a crazy story about the last game played on Ebbets’s yellowing diamond.  The game was played in a descending and gloomy darkness, September 24, 1957.
The opposing pitcher in that game was a man named Bennie Daniels.  It was his first Major League appearance.  Bennie was called up at the end of the season by the Pittsburgh Pirates and given his first Major League start, an auspicious occasion for any young pitcher.  I have seen authors of baseball trivia books ask to shake Bennie’s hand because of the honor of shaking the hand of the last opposing pitcher in Ebbets Field.
Bennie Daniels recently recorded five hours of his personal history for the USC Annenberg African-American Experience in Major League Baseball digital library.  You can find information about the library here.
Now, you would think Bennie would be a fount of information about the last night of Ebbets Field baseball.  You would think he would have glowing autumnal memories of Ebbets in its final splendor.
But, life doesn’t’ work that way.
Asked about the last game in Ebbets Field, Bennie will tell you he doesn’t remember much of it.  Asked about pitching in Ebbets, Bennie will say it was terrible.  The place was a bandbox.  Pitchers hated pitching there.  Asked about the thing he remembered most about pitching in Ebbets’s last game, he will say the only thing that really mattered to him is that he pitched seven good innings and showed the Pirates he could pitch in the Major Leagues.
Bennie Daniels would pitch in the Major Leagues well into the 1960s.  He would be the first African-American pitcher to start a game before the President of the United States on opening day (President Kennedy).  He would pitch on the great Pittsburgh Pirates team of 1960, the one that would go on to defeat the heavily favored Maris-Mantle Yankees in a classic seven game World Series.  He would pitch on the expansion Washington Senators of the 1960s.
You ask Bennie about any of those experiences and he will discuss them in the same business-like way he does the last game at Ebbets Field.
If you want Bennie to light up, if you want him to lean forward and talk about something cool, ask him about the time he played a bit role on the 1960s tv series “I Spy.”  Bennie will smile and tell you the whole story in happy detail, right down to how painful it was to drop to his knees at a run as he was supposedly shot to death.
Bennie appeared in the only “I Spy” episode that the show’s star Robert Culp both wrote and directed.  So, he auditioned for Culp, his first time meeting the star.

The Card: Daniels looks to be in Connie Mack Stadium for this shot. Those red seats and the shape of the corner stands is familiar from many 1959 cards I looked at. Any card with a pink element is A-OK in my book.
Posted by Commishbob at 4:18 PM