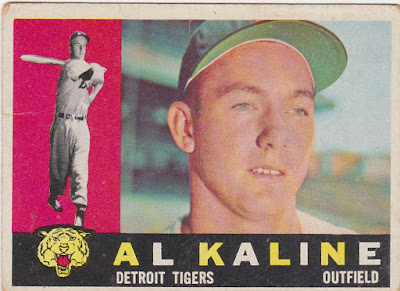 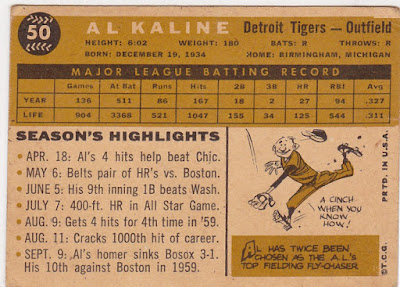 Career: Hall of Famer, class act, native of Baltimore. Not much more to say.


In 1960: Kaline was an established star by 1960. But his numbers took a one year dip that season with his batting average dropping to the lowest he'd had since his rookie year and his other stats (HR, RBI) following suit. It turned out to be a one year glitch in the matrix of what was a sterling career for Kaline. He did make the AL All Star squad for the sixth straight year.


Al Kaline was a teen phenom from Baltimore, MD who became the regular right fielder for the Detroit Tigers in 1954 at age 19. He was signed by Tiger scout (later an executive) Ed Katalinas for a reported $25,000, who told the front office that he was a better player than the starting outfield they had. In 1955, he leaped into stardom, winning the batting championship, the youngest champion ever at 20, younger by one day than Ty Cobb. He played on for two decades, never winning another batting title but finishing in the top three in the American League five more times. He hit 399 home runs although he didn't think of himself as a slugger, and was honored with 10 Gold Gloves.

The Card: Back in the day you knew you were getting a star when you had a 'star numbered' card like #50, #200, #500 etc. Note the Season's Highlights....he had highlights from every month of the season. How very Al Kaline-like...he was consistently a great player. And that's definitely Jack Davis' cartoon artistry.
Posted by Commishbob at 11:19 AM