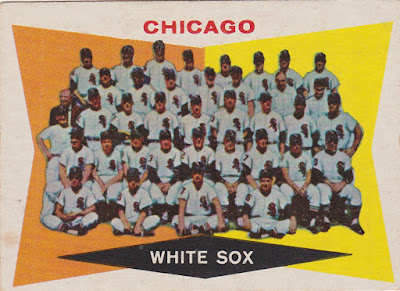 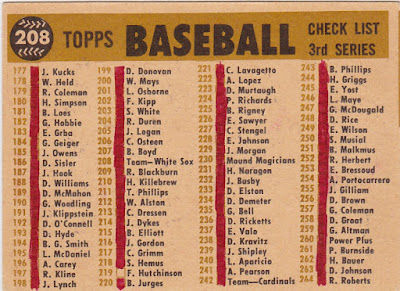 In 1960: The White Sox were coming off their '59 AL championship and World Series loss to the Dodgers. They slipped to third, 12 games behind the pennant winning Yankees and four behind the upstart Orioles. Roy Sievers, Minnie Minoso and Al Smith were the hitting leaders for the club with Luis Aparicio adding speed and defense. In an era where they were refered to as the Go-Go Sox they actually had a pretty well rounded offense. Not a ton of power but they were high in the AL ranks in such things as runs scored and OPS.

Billy Pierce, Early Wynn and Bob Shaw were the big three in the rotation. 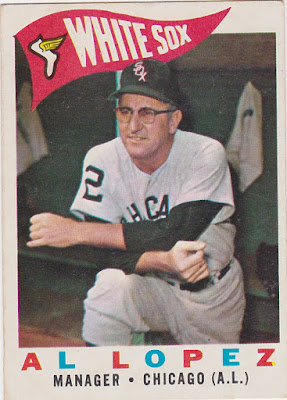 Career: From my post on this card on my main blog: Between 1951 and 1965 his clubs, first the Indians, then the White Sox, only finished lower than second in the American League three times. That's 12 second place finishes in 15 seasons with the outliers being a third, a fourth and a fifth coming in consecutive seasons, '60 thru '62. That's only one season finishing in the second division.

He won a pennant with each of the franchises he managed and was a pretty darn good ballplayer during his playing days as well. In 19 seasons as a catcher he made a couple of All Star squads. 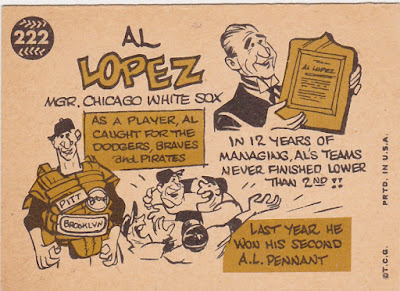 Coaches card: Don Gutteridge and Tony Cuccinello I recall from back in the day. Not so for the other two. Gutteridge was an infielder for 12 seasons, mostly with the Browns and he managed the White Sox ten years after this card came out.  Cuccinello played for 15 years and got MVP votes in three different seasons and made a couple of All Star squads. Ray Berres caught for four different NL franchises from the-mid thirties to mid-forties. Johnny Cooney played 20 seasons in the majors first as a pitcher, then as an outfielder. He also was a long time coach and managed the Braves briefly. 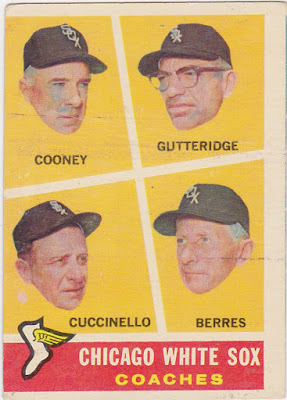 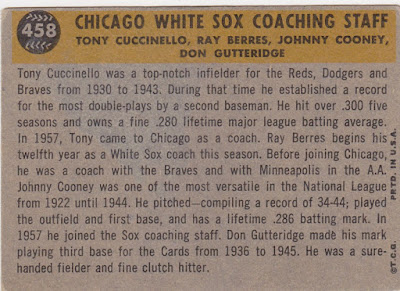 The Card: Way off center but I'm not about to upgrade a coaches card. The floating head coaches cards always remind me of being a young collector. For some reason these fascinated my friends and I.
Posted by Commishbob at 9:00 AM