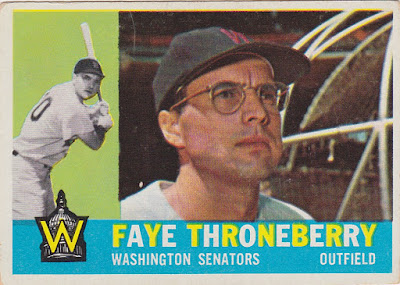 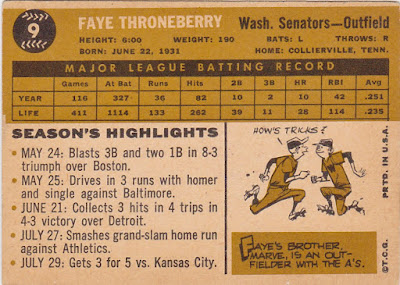 Career: After three minor league seasons in the Red Sox' chain Throneberry debuted in 1952 in the starting lineup and stumbled out of the blocks, A month in the minors helped him turn his rookie season around and he finished with decent numbers. The he spent two years in the military and returned to the Red Sox for two very inactive seasons. He was dealt to the Senators in 1957 and in 1959 he was a semi-regular in the Nats' line-up. He totaled parts of eight years in the majors hitting .236 and finished with a couple on minor league seasons.

In 1960: He regressed to a part time role with the Senators and saw 180 plate appearances. He was dealt to the expansion Angels immediately after the expansion draft. He saw limited duty with them in '61.


Maynard Faye Throneberry was the decidedly less-colorful – and less-celebrated – of the major leagues’ two Throneberry brothers. His younger brother was dubbed “Marvelous Marv”, a player who gained infamy as a symbol of baseball ineptitude, particularly in the field and on the base paths. Faye (he was never referred to by his first name) was coldly profiled by Washington Post columnist Bob Addie as “the Calvin Coolidge of baseball… a reticent young man who feels cheated if he can’t answer every question with ‘yes’ or ‘no.’”1 Addie’s colleague at the Post, the legendary Shirley Povich, agreed; painting Faye as “workmanlike…less than highly exciting.”


The Card: You know it's a pretty ho-hum card when the back is more appealing than the front. The color scheme is one of the least interesting in the set. But the cartoon is clever and the cream colored cardboard and Seasons' Highlights are plusses. 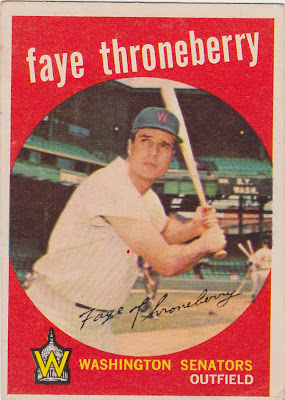 Posted by Commishbob at 7:25 PM